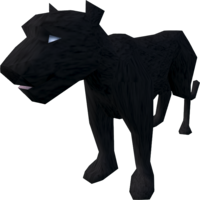 Odysseus was a panther slain by Dragonkin.

Panthers are large, cat-like creatures. In RuneScape, no panthers can currently be found.

However, in a flashback during A Tail of Two Cats, it is revealed that the hero Robert the Strong had a panther companion named Odysseus, who was killed in the Fourth Age during a fight with a Dragonkin.

Whether or not panthers continue to live in Gielinor is unknown. It is possible they were domesticated for combat in the God Wars, which may have forced them to extinction, or suffered from the climate changes that followed. They could still exist in a yet-unexplored area that may be released in a future update.

One creature that somewhat resembles a panther, the nail beast, may be encountered while Temple Trekking. Nail beasts' movements are reminiscent of those of panthers. The larupias found in the Feldip Hills also closely resemble panthers.

During The Fremennik Isles quest, when receiving their secret nickname, the player will ask to be called Operative Panther instead, remarking that "panthers are cool".