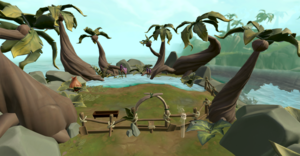 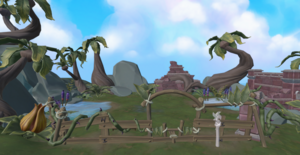 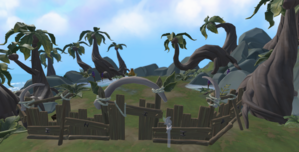 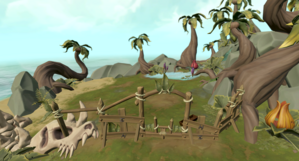 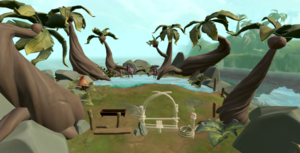 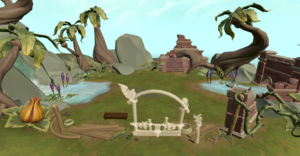 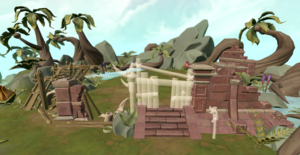 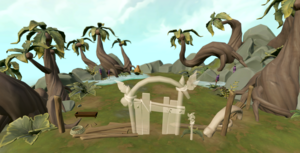 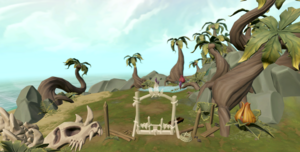 Paddocks or pens are enclosures used for player-owned farming at the Manor Farm and the Anachronia Dinosaur Farm. They can hold a number of animals of the same type (6 for small pens, 4 for medium pens and the breeding pens, and 3 for large pens).

All paddocks/pens, with the exception of breeding pens, can have a farming totem placed on them, which can activate Perks if there is at least one elder animal in the pen.

On the Manor Farm, most animals produce muck/manure, which can be cleared for Farming experience.

Once the tutorial is completed, the breeding paddock is already constructed, but all the other paddocks require a number of planks and nails of increasing quality corresponding to the size of the paddock. When the player can't obtain the required materials by themselves, they can alternatively purchase pen construction kits with beans. As these are fairly expensive, it is only recommended to do so as a lower level ironman. Protean planks can be used in the construction of pens in place of all of the other planks. The required construction levels may be boosted or assisted. Paddock construction may not be boosted with a crystal saw.

There are two paddocks of each of the three sizes: small, medium, and large, as well as a breeding paddock.

Requirements to build the small pen are met upon completing the Anachronia tutorial.

Requirements to build the medium pen involve building the Tier 1 Storehouse (at least 15 hours total) in the Anachronia base camp, further collection time of the required materials varies based on Sleeping Quarters tier and is not calculated in the requirement above.

Requirements to build the large pens involve building the Tier 2 Storehouse (at least 205 hours total or 8.5 days) in the Anachronia base camp, further collection time of the required materials varies based on Sleeping Quarters tier and is not calculated in the requirement above.

Requirements to build the breeding pen involve building the Tier 3 Storehouse (at least 663.34 hours or 27.64 days total) in the Anachronia base camp, further collection time of the required materials varies based on Sleeping Quarters tier and is not calculated in the requirement above.

Each animal on the Manor Farm produces different types of muck in their paddock. When players "muck out", they gain Farming experience depending on the type of muck that is attempted to be cleared. No matter how many times experience is gained, each pile of manure will only fill one bucket.

Mucking out for cows 20 times is needed for I Hardly Manure achievement, which can be done in either a large pen or the breeding pen.

Muck does not affect animal stats or breeding chance. Thus, mucking any manure except dragon manure is mostly useful for its rather low experience gain and the chance at receiving master farmer fragments. While manure and green manure can be used when making compost and supercompost respectively, other items can be used which are easier to obtain.

Players can collect all three kinds of manure (manure, green, or dragon) if one has an empty bucket in the inventory, but mammal and bird droppings cannot be collected.

It is possible to obtain Mod Dolan's rubber duck and Mod Daze's homework from this activity.