From the RuneScape Wiki, the wiki for all things RuneScape
(Redirected from Override)
Jump to: navigation, search
For a list of all cosmetic overrides, see Category:Cosmetic overrides.
"Outfit" redirects here. For other uses, see clothes. 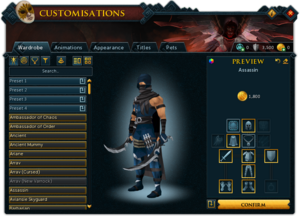 Cosmetic overrides are display changes to a player's avatar character or animation. These can be found in the Customisation interface, released alongside the grand opening of the Solomon's General Store.

Cosmetic overrides are different from physical items itself due to the omission of its own inventory icon as it does not exist in a physical state. Some overrides are not related to what is actually equipped, with the exception of weapons, which can only override physical weapons of the same class. As such, most overrides do not show in player-versus-player situations. After an update, retro replica equipment can be displayed in player-versus-player, with the condition of having the equivalent equipment equipped.[1] In the case of Elite Void Knight equipment, the matching colour (Guardian, Justiciar, or Executioner) must also be selected.

Cosmetic override animations are only played when the corresponding skill is being performed. They do not provide any extra benefits despite the animation played are usually much more dramatic.

Overrides usually have no bearing on actual gameplay, although a few exceptions exist. The New Varrock cultist robes and Zombie outfit (New Varrock), when applied, enable the wearer to progress through the Dimension of Disaster quest without using their physical item counterparts. The Dulcin armour allows entry to the Black Knights' Fortress.

Having any override active in the head slot prevents the player from obtaining the Sword Artist title, and a similar situation occurs when attempting a makeover with Thessalia.

Cosmetic overrides that are unlocked can be identified by the solid blue or brown box around the override's name. If there is a solid gold outline around the box, the override can be purchased from Solomon's General Store. An override with a purple outline and a treasure chest icon on the right can be unlocked through Treasure Hunter. When there is only a purple outline, the override can be unlocked through a limited time event. Finally, a uncoloured box is an override that can be obtained from in-game content.

Players may freely preview and apply (and recolour if possible) overrides. Any override may be previewed (and recoloured), but must be unlocked to be applied.

Some cosmetics can be upgraded through in game actions while wearing the outfit:

Animations are a type of cosmetic override that alter the player's default animation for a number of different actions. Animations that can be overridden include resting; skilling; casting spells, especially teleporting; walking/running; and defeating another player in player versus player combat. Players may change their animation overrides using the customisation interface. Certain items override walk animation overrides, as found at Animation changing items.

The majority of cosmetic overrides are purchased from Solomon's General Store. Aside from the General Store, overrides are also unlocked once a certain activity, quest or seasonal event is completed and other times through completing outfit sets from Treasure Hunter. The 2014 RuneFest distributed the RuneFest 2014 Teleport cosmetic override to attendees of the event via a redeemable code.

Discontinued overrides are ones that could only be purchased or acquired for a limited amount of time. Several early examples of discontinued overrides include the Shadow outfit line (Shadow Cat, Demon, Hunter, Knight, Sentinel, Dragoon and Gorilla), Charity tunics (GameBlast, AbleGamers, DonateGames and YoungMinds Tunic) and so more as time passes.

Some cosmetic overrides unlocked from members-only activities will be locked once the player's membership expires, although they can be unlocked by resuming membership. Those overrides would show up in the customization menu but when the player attempts to apply the customisation, it would be removed. You cannot distinguish which override is locked from free-to-play unless you try to apply it, because there is no guidance and hint on which is locked. All task set items, circus items, loyalty outfits, gilly outfit are notable examples. Only loyalty outfits have an obvious lock symbol to indicate that they cannot be worn in free-to-play, however.