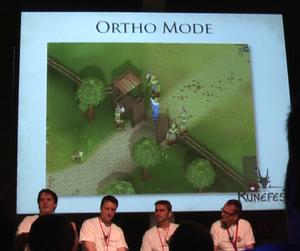 Ortho mode being shown at RuneFest 2010.

Ortho mode (short for orthogonal mode) was a rendering mode presented at RuneFest 2010 by Andrew Gower during the "The Big Questions" session[1] that was intended to be used on mobile devices or other systems that lacked the power to run the 3D engine of the time.

During the "The Big Questions" session, Andrew answered the question "Where are we going to be in the future? Are we going to be on consoles, are we going to be in stores or maybe on the iPhone or iPad?" by showing a simplified rendering mode. This rendering mode limited the player to one of four orthoganal viewpoints (similar to RuneScape Classic), which allows the game to use prerendered assets and thus require less processing power. Andrew stated that this was still an ongoing research process and that a lot of market research still had to be done before something concrete would come out of this.

No further announcements were made later on that use this technology.