From the RuneScape Wiki, the wiki for all things RuneScape
(Redirected from Orthen Dig site)
Jump to navigation Jump to search

The Orthen Dig Site is a dig site located on Anachronia, requiring level 90 Archaeology to be interacted with. It was the sixth dig site released for the skill. The Anachronia base camp is the main location of the dig site, with various excavation sites across the island of Anachronia - crypt of Varanus, observation outpost, Moksha ritual site, and Xolo City.

Mr Mordaut is the site manager. Like the other site managers, Mr Mordaut becomes a research consultant when all mysteries related to Orthen are completed and has a power called Treasure Hoarder, giving a x/24 chance of obtaining a tetracompass piece after each expedition, x being the number of hours the team is sent out for.

Reaching level 90 Archaeology causes the Orthen invitation to be placed in the player's backpack, inviting the player to the dig site.

The final reward of the site is an enhancement to the mysterious monolith's power cap, allowing 150 extra power for a total of 650 power. This requires level 120, unlocking of all the locations, and completion of the Mysterious City mystery.

Follow the quick guide to quickly unlock all 4 sections of the dig site and complete the Teleport Node On, Know Thy Measure, and Fragmented Memories mysteries at the same time. 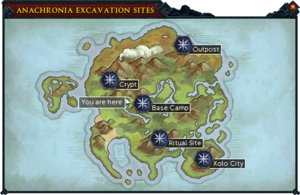 For a short guide to unlocking just the teleports, see the 'Teleport Node On' guide.

For the full guide to unlocking all of the digsite locations, see the Quick guide.

Unlocking all the teleports requires:

The excavation sites in the dig site collectively contain ten different excavation hotspots containing a total of 22 different artefacts as well as five dig site-specific materials. As with all other dig sites, agnostic materials are present in these hotspots.

The soil for this dig site is volcanic ash.

The dig site has an archaeologist's workbench and a material storage container in the Anachronia base camp, and material deposit carts at the excavation sites. If a tier 3 town hall has been built, an archaeology noticeboard will also be set up near Sharrigan.

There are 12 achievements in this group. 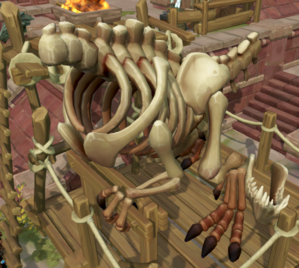 The dig site has a community event, akin to the pylon found at the Kharid-et Dig Site, called Osseous. While excavating players can find rex skeleton fragments which can be used to build the skeleton of a dinosaur located at the Anachronia base camp.

When the skeleton is completed, it activates the

Roar of Osseous buff which grants every player in Anachronia for 65 minutes:

The digsite allows the creation of recipes to separately unlock the following 5 potions:

Note that the potion recipe fragments can be obtained more than once after assembling the tablet and learning the recipe.

There are two skilling off-hands obtainable through the digsite:

These off-hands are rare items aimed at high levels.

The dig site adds 3 new Archaeology relics which may be added to the mysterious monolith at the Archaeology Campus for new relic powers:

Players may obtain an increase of 150 in monolith power after the Mysterious City mystery.