From the RuneScape Wiki, the wiki for all things RuneScape
(Redirected from Orks Rift)
Jump to: navigation, search 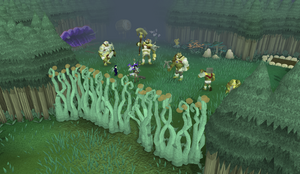 Orks Rift before the explosion, with some nice fairy trees.

In the year 169, the Battle at Ork's Rift occurred here, between the Fairies of Zanaris and Fairy Godfather and his Ork army. With the help of Ivory statues, the player managed to win the battle and banish the Godfather into rift he had created to summon new orks. However, this caused an explosion which destroyed the area and caused the Ivory statues to be cursed, attacking the fairies. But the fairies quickly teleport back to Zanaris with you along. The cursed ivory orks remained here in clusters, one of each combat style.

Dwarf multicannon can be used here and is effective. It cannot be used during the quest boss fight.

The update history project is a work-in-progress – not all updates to this topic may be covered below. See here for how to help out!
Retrieved from ‘https://runescape.wiki/w/Ork%27s_Rift?oldid=35319815’
Categories:
Hidden category: