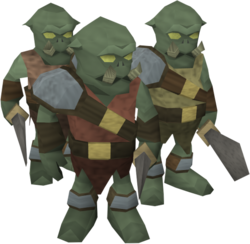 Ork legions are a monster summoned by Bork when he reaches half of his lifepoints. Bork will summon up to six legions to aid in the battle when he reaches 50% health, each consisting of three orks.

They attack with both melee and ranged, with their melee attacks consisting of three attacks at once, in a similar fashion to nail beasts or ripper demons. If they are not within melee distance of the player, they will use a single hit ranged auto-attack.

Ork legions have low lifepoints and a very high chance of dropping charms, and are easily defeated by the use of area-of-effect or multi-targetting abilities. If Bork dies before ork legions do, they will immediately disappear, offering no drop or experience.

During the battle[edit | edit source]