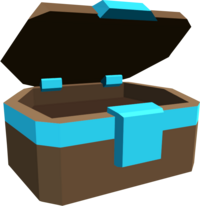 Initially, ore boxes can store up to 100 of each ore, which is increased by 20 as the player reaches certain level milestones. After completing the Everything Is Oresome achievement, requiring 90 Mining, the maximum capacity for each ore except gold and silver is increased by a further 20, up to a maximum of 140.

The Bronze ore box can be smithed directly at an anvil. Ore boxes may be upgraded from the previous tier to a higher tier by adding two bars of the desired metal onto an existing ore box at an anvil. Ore boxes may only be upgraded one tier at a time, and players must have the relevant smithing level to upgrade them. Alternatively, players may purchase and use any of the available ore boxes from the Grand Exchange regardless of the player's mining level.

The ore box's left-click option, "fill", fills the box with all ores in the player's inventory. Ores (including noted ores) can also be individually used on the box to fill it with all ore of that type. A mouse-over tooltip is displayed showing the contents of the ore box sorted from the lowest to the highest tier. The ore box can be added to the action bar, allowing the player to fill the box with a keybind.

The ore box cannot be emptied into a player's inventory. Once filled it can only be emptied into a bank, deposit box or metal bank. The "Deposit-All" option in the metal bank empties the ore box as well as having an "empty" option that works in the bank interface. With deposit boxes, the ore box must be used on it to deposit the contents without banking the ore box, as the empty option does not exist in the deposit box interface, but this does allow the player to return to mining. Simply placing an ore box into the bank also empties the box, placing all the ores stored within it into the bank. If there isn't enough space in the bank, the ore(s) will stay in the box while banked.

Ore boxes share storage between them, so there is no use in owning multiple boxes. The player cannot fill the ore box while carrying more than one of them in their inventory. Attempting to fill the ore box whilst carrying several of them simply results in the player character exclaiming "I can't hold all these ore boxes!", with no ore being added to the box.

The metal bank can be viewed via the "View metal bank" option, but no items may be deposited or withdrawn from it.

A temporary boost in Mining level can increase the capacity temporarily.

If the inventory is filled by mining while carrying the ore box, the game displays a message that the player could fill the box, even if the material mined cannot be stored there (such as when the box is already full).