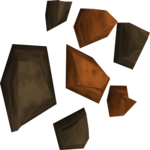 An ore is an item (typically a type of unrefined metal) obtained through the Mining skill from mining rocks with a pickaxe. Ores can be smelted into bars through the Smithing skill. Core ores, silver ores and gold ores can either be stored in the bank, an ore box or the metal bank.

Ores and most mineable items (despite not being ores) are discussed on this page, with the exception of gems that have their own page.