From the RuneScape Wiki, the wiki for all things RuneScape
Jump to: navigation, search
The Old School RuneScape Wiki also has an article on: osrsw:Opulent table
For the flatpacked version, see Opulent table (flatpack).
Required materials: 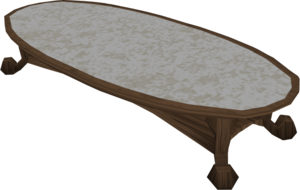 An opulent table can be built in the table hotspot of the Dining Room in a player-owned house. It requires level 72 Construction, 6 mahogany planks, 4 bolts of cloth, 4 gold leaves, and 2 marble blocks to build. When built, it earns the player 3,100 Construction experience.

They were previously used as junk to overcome the forced restrictions of the Grand Exchange as they were worth much more when exchanged with Advisor Ghrim who buys them for 117,522 coins. Just before the Fremennik achievement diary update, the Opulent table flatpack was only worth around 10,000 coins. Players made substantial profit from buying flatpacks on the Grand Exchange and then selling them to Advisor Ghrim, and repeating the process.