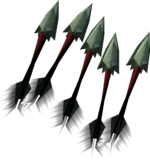 Opal bolts (e) & Opal bakriminel bolts (e) have a 5% chance of triggering the Lucky Lightning effect, which deals 10% more damage to the target.

The abilities Fragmentation Shot, Corruption Shot, Incendiary Shot, and the bleed effect of Deadshot can not trigger the passive effect of bakriminel bolts.

Onslaught can trigger the effect, increasing that hit by 10%. The recoil damage is unaffected by the activation.

Sacrifice can trigger the effect and will heal accordingly to the increased damage.

This information has been compiled as part of the update history project. Some updates may not be included - see here for how to help out!
Retrieved from ‘https://runescape.wiki/w/Opal_bakriminel_bolts_(e)?oldid=35875047’
Categories:
Hidden categories: