Once Upon a Time in Gielinor: Fortunes

From the RuneScape Wiki, the wiki for all things RuneScape
Jump to navigation Jump to search
This article is about the subquest. For the Invention materials, see Fortunate components. 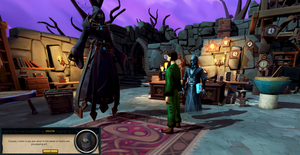 Start the subquest by talking to Closure in his study. After hearing about Relomia's motivations for her actions, you decide to fabricate a quest for her. Closure summons Ariane, Sir Tiffy, and Zanik to the study's lobby as quest-giver candidates.

Talking to all three candidates in the waiting room reveals that none of them are willing to help. After returning to Closure, Death joins the scene to rebuke Closure for people being called in unnecessarily. After telling Death that Icthlarin asked you for help with saving him, Sliske being the danger in the situation, and you eventually saving Death, he agrees to pay back the favour by acting as the quest-giver.

For the middle part of the quest you come up with an idea to collect some spooky scarecrows from the wheat field south-east of the Draynor lodestone and place them on the markers in the woods north-west of the village to act as a safe challenge for Relomia.

Setting up the quest[edit | edit source]

To start setting up the quest for Relomia, go into the wheat field south-east of the Draynor lodestone and pick up three spooky scarecrows. Place the scarecrows at markers set up by Death's minions north-west of the entrance to his office.

Upon returning to Closure and Death, Closure will agree to act as the narrator for Relomia's quest. For a "violent" ending for Relomia's quest, Death will lend you a confiscated sword. Hide the sword at the final marker just west of the scarecrow markers.

Talk to Closure or Death again. They'll send you to find Relomia in either Jolly Boar Inn or Blue Moon Inn and tell you not to worry about the final boss to end the quest. You may optionally visit the inns and ask their bartenders about Relomia's whereabouts to learn that she's been kicked out of the Jolly Boar Inn recently, and can be found in another nearby pub. You'll find Relomia in the Dancing Donkey Inn in south-east Varrock. She will attack you with her new wand, causing no damage. Talk to her again, and you'll get to ask for help, and she asks what's in it for her. Choose any option and she'll agree.

To begin Relomia's quest, empty your backpack and get rid of all your worn equipment and followers, and talk to Closure. 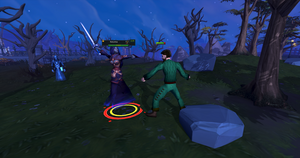 Relomia fighting the villain of her quest.

Death tells Relomia that someone has stolen a powerful relic and taken it into the woods. Relomia accepts the quest and walks up to each of the scarecrows you set up, now appearing as Evil Goons, while Closure narrates. Progression of her quest occurs by talking to her at each stage. Relomia is unimpressed as she can see the goons are just scarecrows, and easily dismisses each goon with her wand until she finally reaches the magic sword you hid, concluding that it must be the artefact that Death lost. Talking to her a final time causes her wand to act up, making the player's speech incoherent, alternating between acting like a villain and trying to figure out what's happening. The player takes the wand from her. The player then realises that they are the final enemy that Death and Closure have prepared for the end of the quest, and assumes the role. Relomia proceeds to attack the player.

During the fight the wand will break, and Relomia will continue healing herself until she manages to defeat you. (You will not actually die as "Death is on your side".) Death rewards Relomia with some gold and Closure gives her an advance copy of her biography. Relomia leaves, seemingly happy. Back in Closure's study the player and Closure conclude by hoping that the quest has given Relomia a new perspective on things. 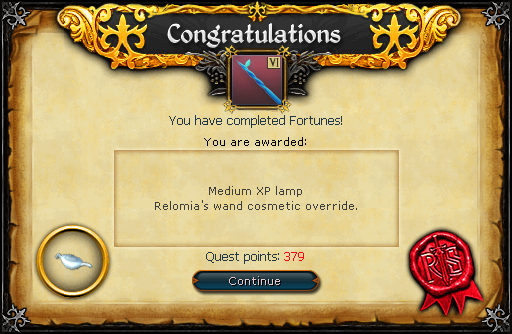 Once Upon a Time in Gielinor: Fortunes is directly required for the following quests/miniquests: