Once Upon a Time in Gielinor: Foreshadowing

To begin the quest, head to the Blue Moon Inn, north of the Varrock lodestone and talk to Relomia.

Relomia is holding a little party to celebrate 20 years of the player's adventuring. She asks you to take a drink and a party hat from the tables to her right (character left). Choose between an alcoholic and non-alcoholic drink. The party hat will automatically be added to your inventory along with the drink. After putting on the party hat and drinking, the player will realise they don't quite feel like themselves.

Listening to Relomia, the player quickly comes to understand that the two of you must have switched identities, as everyone in the bar suddenly believes Relomia to be the player and vice versa. One after another, the three people partaking in the celebration will ask Relomia to tell the stories of her former adventures. The stories comes in a random order.

Since you have interrupted her storytelling, Relomia gets angry and stabs the player, sending them to Death's office.

Even Death will take you to be Relomia, but you're quick to convince him of your true identity. He restores your ability to die numerous times and sends you to Closure, who can be found in the room to the right of Death.

Once you step through the door, you end up in Closure's study, who is writing the biographies for everyone that ever died in Gielinor. As time is working differently in this study, Elvarg, Delrith, and Count Draynor are still waiting in line to have their biographies written by Closure. In order to get Closure to help you, the player has to first do small favours for the those three still waiting in line. It is advised to talk to all three of them before fulfilling their tasks to save some time spent in going back and forth.

Delrith will tell you that by killing him instead of performing the correct ritual he got stuck in this study, even though he belongs back in Dis. After he tells you the five words used as a spell to free him, you'll have to click on them in the right order to recite the spell. This will free Delrith so that you can take his spot in line.

Elvarg will ask you to figure out her inheritance, as her offspring is greedily looking for it. Not wanting them to have her treasure, she hands you a Last Will and Testament that you can trade in with a banker for Elvarg's treasure hoard. After handing the treasure hoard to Elvarg, she disappears and you can take her spot in line.

Count Draynor has been worried sick since he got killed since he is not sure if he turned off the oven. Go to Draynor Manor and turn off the oven in the kitchen, which is located in the north-western corner on the ground floor. Once you return, the count is finally freed from his worries and can move on.

Now that you have cleared the line, go speak to Closure.

Closure understands that Relomia forced herself into your biography but while he can reconnect you to your story, he is unable to break her bond with it. All he can offer is to move Relomia's deed down to the footnotes for the time being. In order to remove her from your story, Closure needs you to have her sign a death contract. Realising that Relomia would never sign a contract with the player, he casts a spell on the party hat that will disguise you.

Go back to Relomia in the Blue Moon Inn and tell Relomia you are here for the celebration and that you're her biggest fan. She will be very happy to hear that and asks if she can do anything for you. Tell her you want an autograph and let her sign the piece of paper you brought with you. Just a moment later, Relomia will once again use her own name and surprisedly come to understand that you have broken her spell. Angrily she takes off, mentioning more plans she has for the future.

Head back to Closure and hand him the signed contract. He finally removes Relomia from your biography turning everything back to normal. Furthermore, Closure mentions that he would be delighted to work with the player in the future, writing their biography. 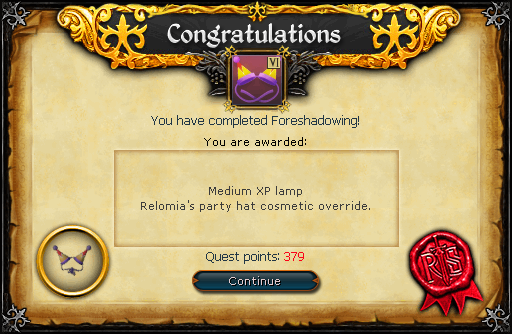 Once Upon a Time in Gielinor: Foreshadowing is directly required for the following quests/miniquests: