Once Upon a Time in Gielinor: Flashback 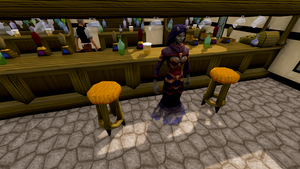 Relomia in the Jolly Boar Inn.

Talk to Closure in his office (accessed through Death's office). He tells the player that Relomia has recently visited, stealing and vandalising a number of biographies in the process. Due to the nature of Closure's biographies, these vandalisms end up having real consequences to the characters involved. Closure then shows the player a replay of his memory of the event, where Relomia departs saying that she's "going to get a drink".

Head to the Blue Moon Inn in Varrock (north-east of the Varrock lodestone), the same pub from the previous subquest Foreshadowing. Approach the bartender there, and he will hand the player a handwritten message from Relomia. In the message, Relomia says that she has changed to another inn in order to make things more "BOARing", which hints at her new location: the Jolly Boar Inn.

Head to the pub, located north-east of Varrock (near the Infernal Source Dig Site entrance) and talk to Relomia. After talking to her, return to Closure with the stack of Closure's biographies.

Unfortunately, the player is too late, and Relomia's edits have already changed reality. Because of this, Merlin, Ozan and Ava show up in the waiting room in Closure's study, as their biographies dictate that they are now supposed to be dead. Though the edits Relomia made in each biography are very obvious, Closure cannot revert them easily because he does not have the appropriate references available, meaning it will take years to restore them. However, since the player was present at each of the moments that were changed, Closure has the idea of sending the player into the corresponding memories using the technique he showed earlier, allowing the player to correct the changes to each memory themselves.

The player must now talk to each person in waiting room in order to access their memory. Doing so causes them to be sent to a certain moment in a quest that person was involved in: Merlin's Crystal for Merlin, Diamond in the Rough for Ozan and Animal Magnetism for Ava. In each memory, certain interactions or objects have been changed, resulting in the person in question dying instead of the quest playing out as normal.

The player is given an oneiric manipulator by Closure, allowing them to play out the memory to see if the details are now correct, or reset it if the memory did not play out correctly. The objective now is to interact with the objects and characters present at each scene such that the details match what happened during the respective quests.

The initial sequence will always result in the person in question dying. Most of the incorrect sequences will result in humorous outcomes, such as the player becoming too frustrated to continue with the quest and teleporting out, or unrelated NPCs appearing to disrupt the memory. The correct sequence must match the what happened during the actual quest; even if the sequence plays out with no deaths or other consequences it may not be what's supposed to happen, and Closure will make the player redo it.

Closure can not properly replicate the look of the player at the time the memory takes place, stating that his technology cannot keep up with how frequently the player changes their looks. As such, the player is represented by a very off-colour avatar.

Merlin's memory takes place near the very end of Merlin's Crystal, when he is rescued from the afformentioned crystal by the player. In Relomia's version, the player attempts to destroy the crystal using a cannon, accidentally killing Merlin in the process. For this memory the player can make changes to the method of destroying the crystal, the type of crystal, and the wall decoration.

The correct options for this memory are the following: The Player should have the Excalibur, The Crystal should be a Giant Crystal, and the wall decoration should be a wallshield. 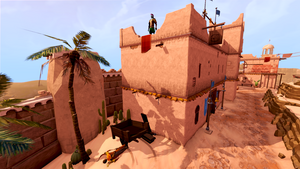 Ozan falls to his death.

Ozan's memory takes place part way through Diamond in the Rough, when he and the player are on top of the Al Kharid bank and about to jump down. In Relomia's version, Ozan is too scared of heights to jump down, and a goblin archer suddenly appears, hitting Ozan for 10,000 damage and instantly killing him. For this memory the player can make changes to the player's actions, Ozan's actions, and the object they land on.

The correct options for this memory are the following: player jumps first, Ozan jumps second, and they land on a straw-filled cart. For the object at the bottom, enter the portal that has the "Exit" option, which will bring you to the ground, before you can interact with the object. 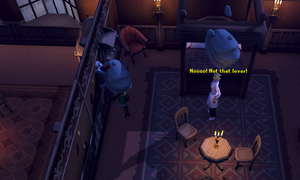 Rocks fall on Ava and the player.

Ava's memory takes place part way through Animal Magnetism, when the player is about to hand her the undead chicken. In Relomia's version, the player hands Ava an undead cow, alerting Cow1337killr who proceeds to kill Ava. For this memory the player can make changes to what the player delivers to Ava, the furniture behind Ava, and the lever the player pulls when leaving.

The correct options for this memory are undead chickens, wardrobe, and lever.

Talk to each person after correcting their memory to send them out of Closure's study. After every memory has been fixed and everyone sent back, talk to Closure, who thanks the player and remarks that he should put in protection so that only he can edit the biographies. 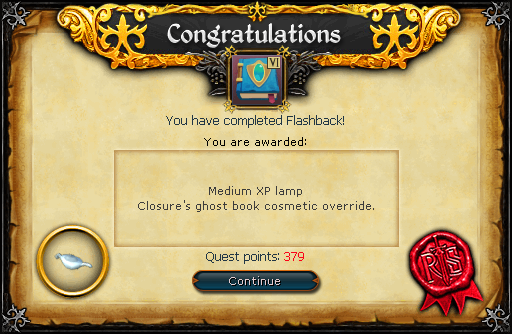 Once Upon a Time in Gielinor: Flashback is directly required for the following quests/miniquests: