Once Upon a Time in Gielinor: Finale

Head to Closure's study and speak with Closure to begin. The fastest way to get here would be to use the War's Retreat Teleport and then exit to Death's office, but the Draynor lodestone would also work. Closure's study is to the right-hand side of Death's desk. After a short dialogue between you, Relomia, and Closure, it is learned that events in Relomia's universe, where she is known as the Time Guardian, have not gone to plan. She and her allies, Meg, Philipe Carnillean, and Kami, have all ended up in Closure's study due to the unfortunate events during her quests.

Head to the waiting area and talk to either Meg, Philipe Carnillean, or Kami to initiate a memory, sending you to the events they were involved in.

Additionally, each memory will have a free agent character that will not be directly assigned to a task, but instead will either support another character or complete an additional role that none of the other characters could satisfy on their own. The free agent may be assigned by talking to Relomia or selecting the option by right-clicking her.

Talk to Meg to enter the memory. The members of the so-called Grey Knights will be standing just outside the entrance to the Black Knights' Fortress in preparation for a break-in. Meg, Captain Higgs, Eva Cashien, and The Raptor (the free agent) are to be assigned accordingly:

Once the characters are assigned (only Relomia is standing at their initial location) talk to Relomia to play the memory. When you are out of the memory, talk to Meg again.

Philipe Carnillean is located in the northeastern most corner of the waiting room; talk to him to enter a memory by the World Gate, where he, Nymora, the Vengeful, Oreb, and Commander Zilyana are attempting to hold off a Bright Inquisitor, a radical pseudo-Saradominist faction ("pseudo" because they believe the Gielinorian Saradomin to not be the "true" Saradomin). The Bright Inquisitor will need to be weakened and then pushed out of Gielinor through the World Gate, as he is seemingly too powerful to be defeated in combat.

Talk to Relomia to play the memory; when it concludes, talk to Philipe Carnillean again.

Talk to Kami and initiate the memory. You will find yourself in an area reminiscent of Kami-shima island in the Wushanko Isles, with a big door, an intricate lock, and some strange symbols, with Kami, Honovi, Sojobo, and Fraji nearby.

The group needs help to gain entry through the big door so that they can create an anima guardian to defend foo lions from a criminal group called Tiger's Claw. The door is locked by a puzzle involving the intricate lock and strange symbols.

Then, talk to Relomia again and play the memory. Once the memory has completed and you have returned to Closure's study, talk to Kami once more to send her away.

Once the three allies have been sent off, return to Closure and talk to him; when Relomia leaves, talk to Closure once more. 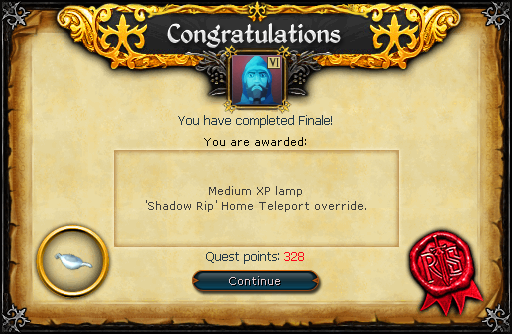 The parent quest can be completed for additional rewards.

Once Upon a Time in Gielinor: Finale is not currently required for any quests or miniquests.

This information has been compiled as part of the update history project. Some updates may not be included - see here for how to help out!
Retrieved from ‘https://runescape.wiki/w/Once_Upon_a_Time_in_Gielinor:_Finale?oldid=35703843’
Categories:
Hidden categories: