Once Upon a Time in Gielinor

From the RuneScape Wiki, the wiki for all things RuneScape
Jump to navigation Jump to search
Not to be confused with Once Upon a Slime.

Once Upon a Time in Gielinor is a novice quest released as part of RuneScape's 20th Anniversary celebrations. Initially, the first three subquests were released individually as miniquests, but once the finale was released on 22 November 2021, they were combined into a four-part special quest.

Main article: Once Upon a Time in Gielinor: Foreshadowing

Celebration rings out from the Blue Moon Inn, a gathering to honour the tales of The World Guardian, led by the ever faithful groupie of Sliske, Relomia. She offers the hero a special hat and brew of her own creation, which are laid out on a table nearby. Later she begins her tales, personally recounting her adventures saving those across Gielinor. Relomia recalls how she chopped the heads off of a three-headed green dragon, used Darklight to banish Delrith, and the time she staked Count Draynor with an iron flock. The player quickly comes to understand that the two of them must have switched personalities, as everyone in the bar take Relomia to be the player. Eventually they recount the true events and the other townspeople agree. Relomia gets angry and attacks the player, sending them to Death who then greets them also assuming them to be her. The player eventually convinces Death of their true identity and work with Closure to break the spell that's been cast. The player convinces Relomia to sign a contract written by Closure, which breaks the illusion. Now angry with Sliske for leaving her alone as well as the player for foiling her plan, Relomia declares that she has more plans in store for the future and leaves.

Main article: Once Upon a Time in Gielinor: Flashback

Closure in his office tells the player that Relomia has recently visited. During that visit she stole and vandalised a number of biographies. Due to the nature of Closure's biographies these vandalisms end up having real consequences to the characters involved (Ava, Merlin, and Ozan). The player is tasked to correct these vandalisms by visiting instances of interactions between the player and the characters involved, one each per character.

Main article: Once Upon a Time in Gielinor: Fortunes

With all her interfering, Closure has started taking interest in Relomia's story to better understand her. But upon looking into it, he can't help but feel sorry for her. The player's life of questing and being a hero is all Relomia ever wanted. To make amends, the player, with the help of Closure and Death, creates a quest for her to complete, letting Relomia be the hero for once.

Main article: Once Upon a Time in Gielinor: Finale

Just when Closure wants to tell the player about their story, they get interrupted by Relomia from the future who died. The player is asked to help Relomia solve the reasons why she died in three separate memories. The memories involve aiding three teams in completing their missions. After doing so the player completes this subquest and subsequently the entire quest by speaking with Closure once more. 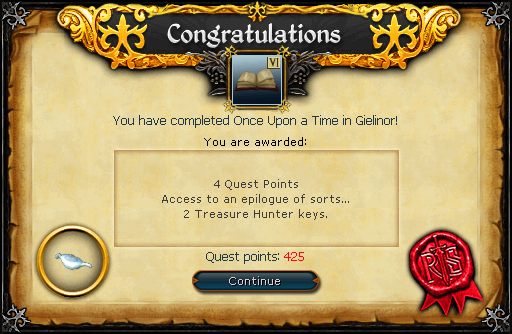 Once Upon a Time in Gielinor is not currently required for any quests or miniquests.

This information has been compiled as part of the update history project. Some updates may not be included - see here for how to help out!
Retrieved from ‘https://runescape.wiki/w/Once_Upon_a_Time_in_Gielinor?oldid=35959449’
Categories:
Hidden categories: