Once Upon a Slime

From the RuneScape Wiki, the wiki for all things RuneScape
Jump to navigation Jump to search
For the achievement, see Once Upon a Slime (achievement).
Not to be confused with Once Upon a Time in Gielinor.

Once Upon a Slime is a novice quest during which the player helps Peter get rid of the King Slime who is, once again, terrorising Rimmington.

Return of the king[edit | edit source] 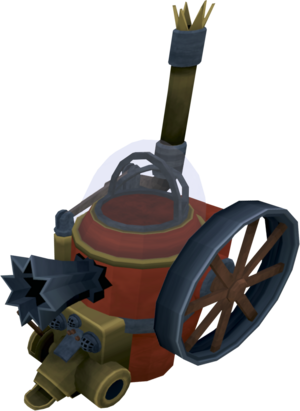 Visit Eva in south-eastern Varrock. She is in the same building as Aubury's Rune Shop in the north-west room (the room with the anvil icon on the mini map). Eva agrees to let the player be the first user of her Shrinking Machine. To use the machine you must first configure it. Right click on the shrinking machine and choose 'Shrink Something'. The options are shown sequentially; answering one question prompts the next one. The first letters of the correct answers put together spell SHRINK.

The machine successfully changes the giant top hat into a regular-sized top hat. Return to Peter in Rimmington, who suggests putting the top hat on the King Slime. A cut scene is shown in which the Queen Slime seems to be uninterested in King Slime despite his new accessory.

Talk to Peter, whose next idea is poking the Queen Slime to figure out what exactly she is attracted to. Go up to the Queen Slime and poke her in order to receive pink goop. Talk to Peter again; he will then give the player a bucket. The pink goop can be used to locate the source of Queen Slime's distraction, which turns out to be the contents of Hetty's cauldron in the house directly east of the well in Rimmington. Use an empty bucket on the cauldron to receive a bucket of purple goop. Peter suggests using the purple goop on the King Slime like cologne. Use the bucket of purple goop on the King Slime and a cut scene ensues, during which the Queen Slime consumes and combines with the King Slime, leaving Peter and the player in shock. The couple leaves Rimmington, hopefully for good this time. Finish the quest by talking to Peter one last time. He keeps the top hat while you keep the pink goop, which is revealed to be a sentient entity. 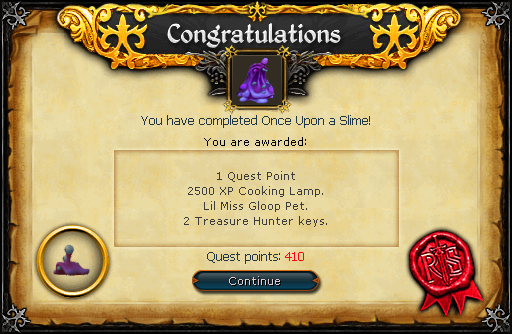 Once Upon a Slime is not currently required for any quests or miniquests.