An old tooth can be found while digging at the Varrock Dig Site in any grid (Level 1-3), found north-west of the Dig Site tents. To dig, a player must excavate a grid with a trowel in their inventory. A gardening trowel will not work. When given to Terry Balando he says, "Oh, an old tooth. It looks like it has come from a mighty being. Pity there are no tooth fairies around here!" 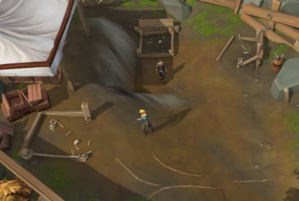 A tooth can be found here, directly north-west of the Dig Site tents.