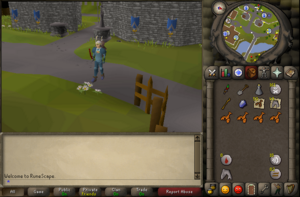 The interface in Old School RuneScape.

Old School RuneScape (sometimes referred to as 2007scape) is Jagex's official term for a previous version of the RuneScape game that was introduced from a backup of the RuneScape source code as it had been on 10 August 2007.

This version of the game was announced in a news post on 13 February 2013, which was followed by the opening of a poll to determine community interest on 15 February 2013. The poll, which ended 1 March 2013, decided, among other things, whether an additional membership fee would be charged for access to the game.

Despite it having originally been stated that servers would take one to two months to be opened following a successful poll, on 22 February 2013, as part of an early access scheme, Jagex opened over 50 Old School RuneScape servers and gave a month of free Old School RuneScape membership credit to all of those who had voted in the poll. The game quickly saw player counts equalling those of the main version of the game.

Old School RuneScape works similarly to RuneScape Classic in that it can be played with the same account that one plays the main version of the game, yet stats, items and quests are separate and non-transferable. All players regardless of achievements in other versions of the game begin Old School RuneScape on Tutorial Island with a blank character. As a result, an economy and money supply has had to emerge from nothing since release.

2007 servers of RuneScape were originally announced in early 2013. Jagex allowed players to vote for Old School RuneScape on a referendum, promising a set of features for every vote mark level reached.

Old School RuneScape referendums were held in four different levels, each with increasing vote requirements. The amount of votes can be seen on the official vote page. Regardless of the outcome, any voter would receive a free month of Old School RuneScape game time. Although the vote count only reached 449,351 and not 500,000, Jagex decided not to charge the additional fee of five USD for the first six months (excluding the free month). However, on 7 June 2013, they announced that OSRS is here to stay and there will be no additional fee.

Note: The green shading in the table above only shows the vote mark reached on 1 March 2013 and the features that would have been given according to that vote mark. There have been many changes since the poll ended; click here to view them.

The first level requires 50,000 votes, and is the absolute minimum amount of votes required to guarantee the Old School RuneScape release.

The following table shows the features that were introduced into OSRS. Jagex allowed other features from the 500,000 vote mark to be introduced in the game.

Most new content in the game is decided by Jagex-run polls based on player feedback obtained from social media such as the RuneScape Forums, Twitter, and Reddit. Players must have at a total level of at least 300 in Old School RuneScape to be eligible to vote in these polls. In order for a poll to be successful, it must be supported by 75% of the votes. Players could vote on the Old School RuneScape's poll page, or in-game via poll booths that are located in every bank.

Some activities are unique in which they can only be found on Old School RuneScape, such as the Abyssal Sire, a slayer boss which can only be attacked when assigned abyssal demons or the boss itself. Other examples include quests like Dragon Slayer II and the introduction of Fossil Island.

Holiday items were first introduced into the game via random drop similar to the original holiday item drops. Each world only had one item spawned at a time in location chosen randomly from a predetermined list. Items stayed visible for 30 minutes or until they were picked up, at which point they would randomly respawn again. The first drop was held in the first week of June. Players could also obtain holiday items by killing a Jagex Moderator.