From the RuneScape Wiki, the wiki for all things RuneScape
Jump to: navigation, search
Offering stone? (edit) 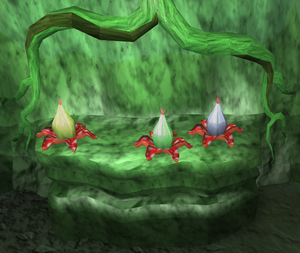 The offering stone is a table found in the Jadinko Lair, north and across the river from Herblore Habitat. Once inside, head southeast of the entrance, east of the Jadinko Queen. Players can spend Jadinko Favour, earned from various activities in the Lair, on a few types of rewards.

It is possible to spend all Jadinko Favour at once or exchange just a few at a time.

There is a cap of 2000 Jadinko Favour, so it is encouraged to spend the Jadinko Favour when they near that amount. How many Jadinko Favour you have is shown on the upper left hand corner. A convenient bank deposit box can be found through the shortcut on the other side of the Jadinko Queen (requires 40 Woodcutting to use).

The Seeds and Teleport option on the offering table is completely influenced by what is currently being attracted in the Herblore Habitat. The seeds obtained at the offering stones will be the same types that are normally dropped by the jadinko that you currently have attracted at the hunter area on the surface. You will not obtain a seed type if the jadinkos on the surface do not drop that seed when caught. If you do not have specific jadinkos attracted on the surface, only blossom seeds can be found. Therefore, when you are ready to collect a reward, make sure you are attracting a jadinko with good seed drops, such as carrion jadinkos. It may also be prudent to shoo away common jadinkos with a striped vine, to eliminate low-level seeds from the reward pool.