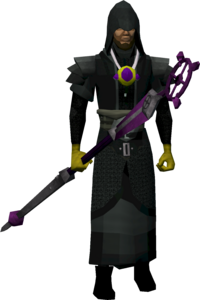 Odischamp is a player spoof involved in The Elder Kiln. He is found fighting in the Fight Pits to kill several Ga'als. He must be defeated during the quest. He attacks mainly with Earth Surge spells. Protect from Magic or Deflect Magic would stop a majority of the damage. Players are strongly recommended to kill him first as he starts off attacking Ga'al-Jeh. He has a fairly high defence, but it shouldn't be too much of a problem for players with 80+ Attack.

He can hit pretty accurately into the 300s, so protection prayers are very useful.

He appears to be wielding an amulet of glory, Zamorak's book of chaos, an ancient staff, a pair of light mystic gloves and Ahrim's robes.

He was one of the deceased celebrated during the Festival of the Dead. His memorial was attended by Cow1337killr, even though they didn't get along due to Odischamp's constant negativity.[1]