From the RuneScape Wiki, the wiki for all things RuneScape
Jump to navigation Jump to search
This article is about the removed standalone store. For the current oddments store, see Marketplace § Oddments. 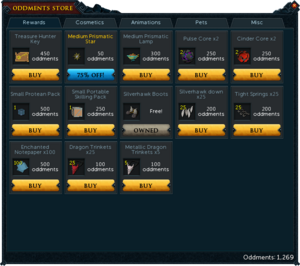 The Oddments Store was a shop that sold older event items and Treasure Hunter prizes in exchange for oddments. It could originally be accessed by talking to Lady Niya, found near the Burthorpe lodestone, or by the "Open store" menu option on oddments stored in the inventory or currency pouch. As of an update released on 7 June 2021, the shop no longer exists by itself and has instead been incorporated into the Marketplace.

Originally from March 2018 The Equinox event. These items were available in Oddments Store from 8 April 2019 until 21 October 2019.

Originally from January-February 2017 Deathbeard's Demise. These items were available in Oddments Store from 4 October 2018 until 8 April 2019.

Originally from August 2015 Death Lotus Training. These items were available in Oddments Store from 4 October 2018 until 8 April 2019.

Originally from November 2016 Birth by Fire event. Items were included in Rewards tab.

Starting from 10 March 2020 the Treasure Hunter keys, medium prismatic fallen stars, and medium prismatic lamps have received discounts (10%, 25%, 33%, 50% or 75% off) in Oddments Store. The discounts are randomised, and change every day at midnight and on server restarts.

The recurring sales were preceded by a 66% discount for medium prismatic fallen stars and cinder cores from the start of 13 February to the end of 17 February 2020.