From the RuneScape Wiki, the wiki for all things RuneScape
Jump to: navigation, search
Odd BillyOdd Billy (bird fancier)? (edit) 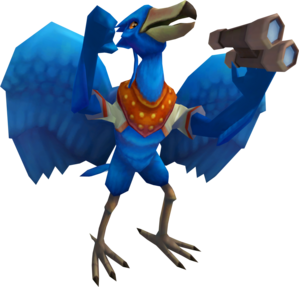 Odd Billy is an aviansie that is located on north-east Cyclosis. He is south-east of Wan Pian (flotsam merchant) and north-east of Sinuman (food merchant).

He has a deep fascination with birds, and will ask players to watch for rare birds in The Arc and take notes on them to bring to him. He gives hints on when and where to find the birds depending on how many birds the player has inspected. If the player manages to spot all sixteen birds, Odd Billy will reward them with Iago as a follower pet.

When speaking to Ember, she believes Billy sent the player and says she isn't interested.

Odd Billy may occasionally appear at the Anachronia Dinosaur Farm on Anachronia. He may be sold oculi apoterrasaurs in exchange for beans. As a large-sized animal buyer, he will appear or renew his order for oculi apoterrasaurs every three days and purchase up to 6 animals before leaving, unless the player is at least 'Senior Master Farmer' rank in the farming reputation system; then he will buy up to 12.