From the RuneScape Wiki, the wiki for all things RuneScape
(Redirected from Obsidian armour)
Jump to: navigation, search
The Old School RuneScape Wiki also has an article on: osrsw:Obsidian equipment

Obsidian equipment is a group of TzHaar weapons and armour from TzHaar City that is members only. To wield obsidian weaponry and armoury, the player must have at least level 60 Attack, Strength, Magic, Ranged or Defence, except the cape, which has no requirements. The Obsidian armour set is untradeable and is made by Smithing obsidian bars, which can only be acquired by playing the Fight Cauldron minigame after the quest The Brink of Extinction.

To obtain the obsidian armour set, the player must smith the components using Obsidian bars, which they must make themselves by smelting Obsidian shards from the Fight Cauldron Minigame, available after completion of "The Brink of Extinction" quest.

The names for all obsidian equipment, except for the Obsidian armour set and capes (obsidian cape and fire cape) are in the TzHaar language, unlike other types of equipment.

To obtain the fire cape: 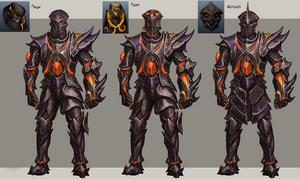 Obsidian armour is an untradeable armour set of the All class that requires level 60 Defence to equip. Although the armour requires 60 defence to equip, the Brink of Extinction quest is required to be completed in order to obtain obsidian shards to forge the bars that make and repair it. The quest has a defence level requirement of 80, effectively serving as a preliminary requirement for the armour. It is player-made from obsidian bars and requires 80 Smithing for the full set. The obsidian bars are made from obsidian shards, and can be gathered by killing opponents in the Fight Cauldron minigame, which requires completion of the Brink of Extinction quest.

Obsidian armour works as standard non-degradable All-classed gear on the surface world, but it degrades and offers special effects in the TzHaar city and its three minigames. It will heavily reduce all damage taken there, including damage from other players (PvP in the TzHaar Fight Pit). This damage reduction is cumulative of each armour piece, for a reduction of 55% when wearing the entire set and 45% without the kiteshield. One can receive a further 10% reduction by donating TokKul at the Fight Cauldron, which will also reduce the rate of degradation (see below). The effect lasts for 20 minutes, and one may donate up to three times to extend the duration to a whole hour.

All pieces of armour have an initial 4000 charges before being completely degraded. They have a chance to lose charge from any hit taken in the TzHaar city.

A full repair on any item costs 40 shards. So it is more expensive to repair all items than to replace them—except the platebody. 12 shards/1 bar to make gloves vs 40 shards to repair. Be careful not to accidentally repair all when attempting to smith shards. A single click on shards will instantly consume them in repairs if you are wearing obsidian armour.

There is no "All" obsidian helmet, but instead a classed helmet for each combat style. They are the obsidian warrior helm, obsidian ranger helm and obsidian mage helm. A helm increases accuracy against obsidian creatures by 10% in its respective attack style. The helms will also act as a slayer helmet when on a TzHaar task, increasing your damage by 12.5% and your accuracy by 12.5%.