The Observatory Quest is a standalone quest where you must help the professor of the observatory repair the building and restore it to its former glory.

The Observatory in south-west Ardougne has been ransacked by a family of nearby goblins.

Can you help the professors to rebuild it?

Teleport to Yanille, then walk west to the building north of the observatory (north of Castle Wars) and talk to the professor in the reception. Bring up the observatory and you'll be informed that the observatory telescope is broken. He explains that the houses up on the hill outside have been occupied by unruly goblins who have caused him nothing but stress.

The professor asks for your help, the idea presented by his assistant, in rebuilding the telescope. When you agree, he'll ask you to get some materials for the telescope parts.

First, he asks you to provide him with 3 wooden planks for the telescope base. He says to talk to his assistant if you need help, but you don't need to in order to continue. Talk to the professor to give him the planks. Next, give him a bronze bar for the tube and some molten glass for the lens. To make the lens into an exact shape and size, you'll need a lens mould which, unfortunately, the goblins have stolen.

Leave the house and head east to one of the abandoned buildings. If you didn't bring an antipoison, there is a super antipoison (1) respawn in the south-eastern building.

Climb down the stairs in the west building to arrive in a maze-like dungeon, which is littered with chests throughout it. One of these chests contains the goblin kitchen key - its location is random for each player - while the others hold a single dose of anti-poison, a level 15 poison spider, or simply nothing. 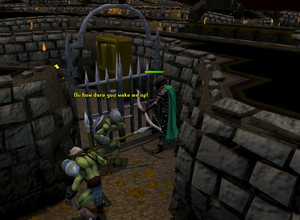 Run to every dead end and search the chests. Go through the dialogue until you find and obtain the kitchen key. Once you do, head to the sleeping guard guarding the kitchen to the north. Prod him awake, and he'll turn into a level 28 goblin guard. You can either kill him or lure him far enough from the gate to get into the kitchen. Inspect the goblin stove there to find the lens mould, which the goblins were apparently using for cooking. 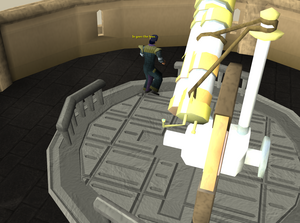 The professor repairs the telescope.

Head back to the professor with the mould and he'll instruct you on making a telescope lens; simply use the molten glass on the lens mould. Talk to the professor again and he will ask you to meet him at the other side of the observatory. 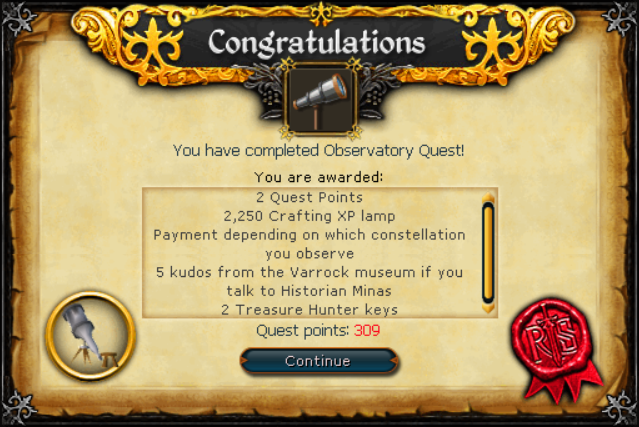 Should a player look through the telescope again after the quest is completed, they will see the Scorpio constellation. The Observatory professor will suggest going to see his assistant. Upon speaking to the assistant, who reveals that his name is Patrick, he'll thank you for having made his life easier and give you a jug of wine.

He also mentions a book on the nearby table named 'The book of astronomy', which speaks of Scorpius' grave. Travel past the abandoned buildings, and keep going north until you see some level 28 ghosts near the entrance of the Ourania runecrafting altar. The Spirit of Scorpius is located in this area with the ghosts; after a brief conversation, it will give you an unholy mould and tell you to return when you are worthy. With the mould, a ball of wool and a silver bar, make an unholy symbol and return to the grave so that Scorpius can bless it.

Observatory Quest is not currently required for any quests or miniquests.

The Observatory
The unlisted track that plays during the cutscene after you reach the Observatory.
Retrieved from ‘https://runescape.wiki/w/Observatory_Quest?oldid=35984035’
Categories:
Hidden categories: