From the RuneScape Wiki, the wiki for all things RuneScape
Jump to: navigation, search
This article is about the staff in the Crucible. For the Bounty Hunter reward, see Obliteration.
Item JSON: {"edible":"no","disassembly":"restricted","stackable":"no","stacksinbank":"yes","death":"reclaimable","name":"Obliteration","bankable":"no","gemw":false,"equipable":"yes","members":"yes","id":"24457","release_date":"19 June 2012","restriction":"removed","release_update_post":"The Crucible","lendable":"no","destroy":"Drop","highalch":false,"weight":1.8,"lowalch":false,"tradeable":"no","examine":"A mage weapon of incredible power.","noteable":"no"} 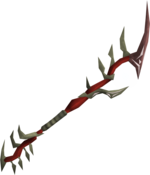 Obliteration was a weapon used in the Crucible. It was obtained by killing a Supreme Champion or being the champion yourself. This is the magic version of the three Supreme weapons, the ranged version being Decimation and Annihilation for melee. This Obliteration was discontinued when the Crucible was replaced with Deathmatch on 26 September 2016, though a a version is available during Deathmatch, and a surface version was introduced with the re-release of Bounty Hunter on 14 November 2016.

Clicking the Devour option will collect any nearby trophy bones from the ground and will be placed in the player's inventory. It also provides infinite air runes.

Obliteration, along with Annihilation and Decimation, was dropped by Ded Meet when killed during the tutorial, The Supreme Champion. Although the player is instructed to pick up the three weapons, they could not and the tutorial ends without a chance to use them. However the player is able to use them in the next tutorial, Supreme Weapons.

As with Annihilation and Decimation, it could be keepsaked. Players with this version keepsaked kept it when the new version was introduced.

A player using the Devour option.