From the RuneScape Wiki, the wiki for all things RuneScape
Jump to: navigation, search
For one of the weaknesses in Combat, see Evolution of Combat#Weaknesses. 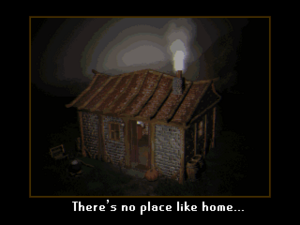 "Nothing" can be found on the POH loading screen.

Nothing was something that can be examined while in a player-owned house, in the Dorgeshuun Goblin Cave, or in Daemonheim. When examined, it states, "There's nothing there," or, "An eye-wrenching nexus of utter negation!" It was most likely there due to technical reasons which cannot be removed.

Just like most other Construction glitches, this small glitch is completely harmless and does not really affect anyone in any way. Also, in the Workshop, nothing can be built, but this will bring up the repair benches' building screen, this is most likely because the "nothing" is the space where the repair bench stool is when a repair bench is built.