Noclipping is the ability to walk through barriers such as walls. This glitch was called the noclip glitch because it let you do almost everything actual noclipping did. Jagex Moderators can noclip if necessary.

Around July 2008, the noclip glitch was discovered by players that allowed them to go past almost any barrier in RuneScape. The players who discovered the glitch promptly told one of their friends how it was done, who later popularised the bug with several videos. The glitch was performed by abusing a bug in the Fishing Trawler that allowed a player to be teleported 150 spaces west or east from outside of the trawler. It was used to do several major bugs such as buying a Cape of legends from the Legends' Guild without having done the Legends' Quest or getting into areas that were normally inaccessible.

A player inside the Grand Exchange fountain.

The glitch was patched on or a couple weeks before 11 November 2008 with the release of Stealing Creation.

Jagex did have to patch the Legends' Guild so players who did not complete the quest could not buy a cape of legends and also patched several items that assisted in performing the glitch. Ultimately only a few players abused the bug. A couple were banned for blatantly using the bug, but most players who did it were not affected due to lack of evidence. One of the players originally banned had reportedly had their ban lifted but was banned later for repeated bug abuse.

Another instance of noclipping occurred in January 2009 on World 9. Players were able to move freely as far north as Falador, and as far south as Port Sarim. Players could also visit Tutorial Island. Shortly after the discovery of the noclip glitch Mod Hulme, member of QA, arrived in-game to verify and deploy a hotfix to patch the noclip glitch.

Other instances of noclip[edit | edit source]

Other forms of noclipping have been discovered but they were not as significant as the Fishing Trawler incident and were leaked and patched very quickly. 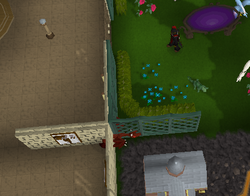 A player walking on water
Retrieved from ‘https://runescape.wiki/w/Noclip_glitch?oldid=35090938’
Category: