The medium ninja monkey greegree allows players to turn into an archer monkey on Ape Atoll and in the Ardougne Zoo. While in this form, the player may use the Agility course located on Ape Atoll. To make a ninja greegree, the player must take monkey bones from a Ninja Monkey and a Monkey Talisman to Zooknock.

There are two different ninja greegrees. This is made using bones from Padulah or Duke, Uodai or Ouhai summoned by Ape Atoll residents (level 149), although players don't have to kill the summoned ones (Karam kills them). However, getting these from killing Padulah directly is recommended as it is much simpler.

There is a glitch if you get caught and you try to switch back to your monkey form, there is a small chance you will lose your greegree. However this glitch is not common.

The sleeping monkey does not summon guards.

While it is possible to kill summoned guards for the bones, Padulah could be killed without hassle and is strongly recommended.

If the monkeys touch the player they send them to jail. While players are hiding the 10th Squad Assassin kills the monkey. Walk back out as a monkey and take the bones. Beware, if more than one monkey appears, he only kills one of the monkeys. Players should wield the greegree to avoid being attacked by the other one, but they should also be aware that a greegree cannot be wielded if they are in combat. Also, since an NPC killed the monkey, anyone can take the bones immediately. Another option is that players can run into the grass behind the shop and put the greegree back on. When players come back Karam will have killed the monkey.

If players insist on killing summoned guards, a much more reliable method for high levels is to summon them by talking to Solihib. The guards would often become stuck behind jungle plants and they could be safely ranged or maged. Be quick, as they disappear soon.

The greegree is mainly used in Recipe for Disaster, or training agility at the Ape Atoll Agility Course. The small ninja greegree (from Monkey Archers) can be used to access said course quickly without having to use runes or the gnomes to travel to Ape Atoll, by using the Fairy ring CLR (only after completing A Fairy Tale III - Battle at Ork's Rift). The medium ninja greegree cannot be used for the shortcut. 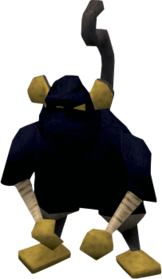 The update history project is a work-in-progress – not all updates to this topic may be covered below. See here for how to help out!
Retrieved from ‘https://runescape.wiki/w/Ninja_monkey_greegree?oldid=33315752’
Categories:
Hidden categories: