From the RuneScape Wiki, the wiki for all things RuneScape
Jump to navigation Jump to search
This article is about the creature in Doric and Boric's tasks. For the creatures at Ape Atoll, see Monkey Archer.

The ninja monkey is a monkey who picks up the weapons crate after it has been left behind Herquin's Gems in Falador as specified in the suspicious note. When trying to identify the customer behind the order, the player sees the monkey approach the crate, and attempts to warn them of the weapons inside it. The monkey throws a banana at the player, knocking them out. A reward and several banana skins are left in the box after collecting the weapons shipment. The monkey later apologises to the player in a note. 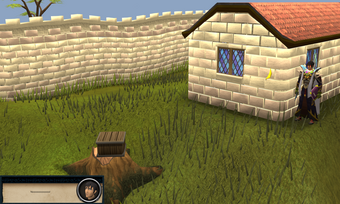 The ninja monkey knocking the player out

Transcripts Ninja monkey is the author or co-author of:

This information has been compiled as part of the update history project. Some updates may not be included - see here for how to help out!
Retrieved from ‘https://runescape.wiki/w/Ninja_monkey?oldid=35644058’
Categories:
Hidden categories: