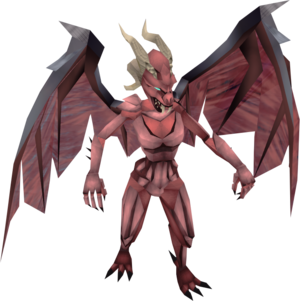 Nihil, properly called Zarytes, are a race of powerful beings that were created by the god Zaros through weaving the living essence of other races. There are four varieties of nihil, each created from a specific race and attuned to one of the four elements of the Ancient Magicks. They are fought as bosses on Freneskae during Fate of the Gods. The most powerful Nihil to have lived is Nex, although she is considered to be a boss fight and not a regular monster.

After the quest, players can return to Freneskae and repeat the boss fight, or fight them for slayer and combat training. In order to harm the nihils outside of the boss fight, the player must have a Slayer level of 76. They may be assigned as a slayer task by paying 50 Slayer points, which can then be toggled on and off; however, the player must repay this fee if they wish to resume getting more nihil tasks without blocking them. The Shard of Zaros will keep the nihil tolerant; without it, nihil will be aggressive towards the player.

Nihil encountered during the boss fight and repeat are significantly stronger than the post-quest variants, possessing a charge attack and a "Nothing" weakness with high defence and low affinity. The post-quest variants are far weaker, lacking the charge attack (though they still retain their combat properties), have varied affinity values and also possess weaknesses making them far easier to fight.

Nihil have a generous drop table and are primarily killed for their components, which are used to create nihil familiars, powerful Summoning creatures that are able to increase the player's accuracy by 5%. This makes the familiars useful at bosses with high Defence and low affinity, such as Vorago and Telos. They can also drop the Zaryte bow, but at a massively reduced rate compared to Nex.

The nihil were created as part of Zaros' attempt to combat the infertility of the Ilujanka, also known as the Dragon Riders, by manipulating and weaving around their living essence. Zaros did not have enough power to manipulate their essence and restore their ability to procreate, so he returned to Freneskae to harvest energy from his creator, the elder god, Mah.

Once on Freneskae, Zaros reformed the essence of icyene, demons, aviansie and vampyres into the nihil, which he brought to life using Mah's energy; as an elder god's divinity was the only way to create life from nothingness. As he required Mah's energy to give life to the nihil, Zaros considered them and himself a failure, and he abandoned them on Freneskae.[1] What happened to the nihil after this is largely unknown. 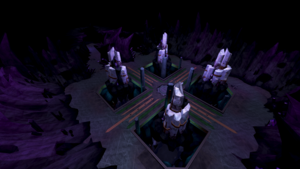 The Pit on Freneskae, where Zaros experimented with other races.

One of the nihil grew much quicker than the rest, which caught Zaros' attention. Zaros decided to give this nihil a fragment of his consciousness in order to prevent the remaining nihil from destroying her for being different. She learned quickly from Zaros and took the Infernal language name of Nex for herself.[2] Nex proved to be one of Zaros' most powerful and loyal servants.

The Fallen Nihil appears to be one if not the only earliest known nihil subject, who claims that Zaros tortured him in the depths of Freneskae while searching for a cure for the Illujanka. The fallen nihil is significantly different from the other nihil, as the present nihil appear to be all female, while the fallen nihil is a male. The fallen nihil's past is mostly unknown, but he eventually came into the service of the Queen of Ashes and served as her envoy. Whether his increased size and intelligence came from Zaros or the Queen of Ashes remains unknown.

During the Sixth Age, when the World Gate was rediscovered, the World Guardian was sent to Freneskae to look for Zaros. They traversed the hostile and barren land, where they spotted several nihil, but were unable to make a clear identification on them. They would not be confronted until they reached The Pit, where Zaros had experimented with the nihil. Four nihil immediately arrived and ambushed the World Guardian, but they were able to dispatch them with ease. More nihil would be found later, after Mah left the surrounding area.