From the RuneScape Wiki, the wiki for all things RuneScape
Jump to navigation Jump to search
Nic the traderNic? (edit) 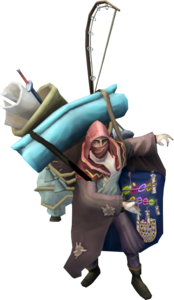 Nic the trader is the owner of Nic's Store. Similar to his brother Vic the trader, Nic trades credits for bonus experience which can be spent at his store to purchase prismatic lamps or stars, skill outfit pieces, and rewards which were previously on Treasure Hunter. Since Nic's involvement in Double XP Live, the credits earned for his brother's shop do not carry over to his own.

The following message was shown upon login during the duration of his second appearance:

Nic the trader is back in town with more 'repurposed' items from his brother Vic. Catch his cheekily cut down prices whilst you can!

During the Golden Partyhat Hunt event, active from 22 November 2021 to 3 January 2022 as a part of the 20th Anniversary celebrations, he could be found at the Grand Exchange in Varrock, selling one of the eight golden partyhat shards, needed to assemble a golden partyhat, for 30,000,000. If a player has already received eight shards, or has made their golden partyhat, Nic will no longer sell the shard to the player.

During Double XP Live events since 30 May 2022, Nic has been appearing in various locations, exchanging one hour of player's Double XP Live timer each day for credits to use in his store.