Nex: Angel of Death is a successor to the original Nex boss fight. The entrance to her arena is a hidden door found on the southern wall of the original Nex's lobby area, which requires a Frozen key and either 40 Zarosian kills or a set of Ancient ceremonial robes to enter. If the player has completed Gielinor's Most Expensive Doorstop, the Frozen key and the 40 killcount/Ancient ceremonial robes are no longer required. Therefore, players require level 70 Agility, Constitution, Ranged, and Strength to battle the Angel of Death.

Although the suggested team size is 7, up to 50 players may fight the Angel of Death per instance. Fighting her in a size of 8 or larger when the encounter starts will disable the record timer.

It is not possible to use a deathtouched dart on Nex in this encounter.

There are two lore books, The Promised Gift and The Praesul, which can be claimed from the exit pillar at the end of the kill or as a drop from the first kill. These books explain the story behind Nex's relationship to Zaros, including the mention of Zaros preparing to give something to Nex which is made in Children of Mah. All players will obtain these books as a drop from their first kill, provided that they participated and survived the encounter. Reading both of these books is a requirement for the master quest cape. Once obtained, they will no longer be dropped.

The Angel of Death has two tables; the first drop table is the main drop table, where unique items (wand, core, codex and chest) can be rolled. After the changes released on 25 March 2019 [1], the main drop table can be accessed by holding Nex's aggression the longest (capped at 1 player) or dealing the highest DPS (capped at 6 players) - therefore, each kill always has seven rolls on the main drop table, provided that seven players survived the encounter. All rolls are independent of each other, so it's possible to get multiple unique drops per kill, albeit extremely rare.

A second, inferior drop table is awarded to the next top three damage dealers who are not eligible to roll for the main drop table. This is only accessible when fighting Nex in a group of eight or larger, and does not have access to the unique items.

Regardless, both drop tables have access to the blood tentacle pet unlock item.

is the player count at the beginning of the fight; this is done such that the expected number of wands/cores come out to the same number per kill:

(given the player count is between 1 and 7). The per person drop rate to receive either a wand or core for team sizes of 8 or higher is

[2] for those who roll on the primary table. After the changes released on 7 May 2019[3], the praesul codex has a drop rate of

per person[4]; this is done such that the expected number of codices come out to the same number per kill:

(after failing to receive either the wand or core).

These drops are awarded to next three players (if applicable) after the main drop table is rolled.

This is awarded to players who have access to either drop table.[5] 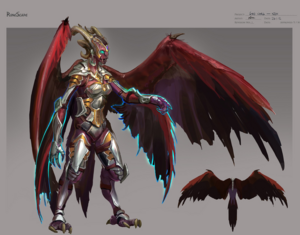