A newspaper is a readable item that informs the reader of different events and going-ons in and around the city of Varrock.

Players can purchase an issue of the Varrock Herald for 50 coins from Benny in Varrock Square. However, the content of the paper is almost never updated. Purchasing a newspaper is required for completion of one of the easy Varrock achievements.

Another edition of the newspaper can be seen briefly during the finishing cutscene of As a First Resort, as it contains a report about the opening of the spa in Oo'glog. 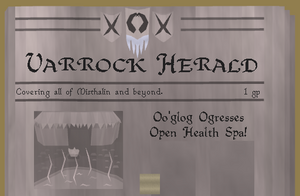 The Herald announces a spa opening in Oo'glog.

The following text is transcluded from Transcript:Newspaper.
Issue 4
King Roald scandal!
King Roald believed to have been spotted at the Dancing Donkey, disguised as a regular citizen. Bill, a Varrock local claims he saw the King on two separate occasions. The palace has not released a statement on the issue.
In other news

Aubury the rune seller turns 21 today. Claims to have been same age for the last 40 years.

The Queen is visiting Varrock as part of her royal tour to celebrate her Diamond Jubilee! Citizens from far and wide have flocked to the celebrations, as well as dignitaries from other areas of Gielinor. We caught up with Fremennik representative Thok, who remarked, 'Thok smash puny reporter'.

Cleaners out of work! 'It's like everyone has just abandoned us' claims one Varrock street sweeper.

The city of Varrock is the latest recipient of a complete makeover. When interviewed, King Roald said, 'In order to keep visitors coming to see the sights of our beautiful capital, we felt that tidying-up the city would be more effective than just issuing a decree - make sure you visit the new museum while you are here.'

Lowe's Archery Emporium for the finest ranging weapons in town!

Time to party! Visit the Fancy Dress Shop for all your party outfits.