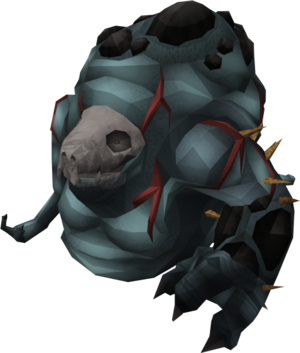 Neem oil is made by squishing a neem drupe while having an empty jug in your inventory. There are several vines throughout the top level of Polypore Dungeon to allow players to collect drupes. Once a drupe has been squished into a jug, all further drupes are automatically squished.

The oil is stackable within the jug. The "Check" option is used to see how many doses of neem oil there are, as the appearance of the jug does not change according to the amount of oil stored in it. The jug can hold up to 2000 neem oil.

It can be used by using the "Sprinkle" option on the jug when near a monster in the Polypore Dungeon - the target will be selected automatically based on proximity. When used on a target, the player runs towards it before splashing the oil on them, causing the monster to hiss and damage their spores. This severely weakens the monster, reducing their max hit by 50%, lowers their Defence, reduces their attack speed and prevents them from infecting the player with fungi. For grifolic monsters, it disables their magic attack. Neem oil lasts for 20 seconds, after which the monster's spores are repaired.

If the "Sprinkle" option is used when no possible targets are nearby, nothing will happen and the player will be notified. "Nearby" is defined by within 6 squares of the player in any direction. For example, a Ganodermic runt three squares north and three squares east of the player could be sprinkled in this manner, while one seven squares south could not.

The materials given by a jug of neem oil are unaffected by the number of doses.