Lord Yudura, first known as Dangerous figure in the Nadir saga, is a cruel necrolord mentioned in The Rimebound Letters, a lore relating to Nadir, a Fremennik saga in which it is revealed that he was murdered after an attempt to assassinate the part Mahjarrat Moia, disguised as Captain Toma. He is the author of the third letter, and is also mentioned briefly in the first.

In combat, he casts Earth Blast and summons level 19 zombies. His magic attacks are quite accurate. Focus on Yudura, as the zombies crumble as he dies.

Yudura's letter is a request to a slave trader named Cermak, asking for six slaves and eighteen corpses:

Yudura placed the merchants Hearthen and Prospero in charge of this transaction, and specifically warned Cermak not to remove the slaves' tongues.

The letter was written after Bilrach disappeared in 165, but before the strange power appeared in 169. Yudura indicates a dislike of Bilrach, saying he is hopeful that his followers will soon no longer have to "languish in a madman's shadow". He wishes to fill the resulting "gulf of power" himself, seize control of Daemonheim, and expand onto the surface of Gielinor as well. Yudura threatens Cermak with death at the hands of his "agents", who are "unhindered by locked doors or armed guards". 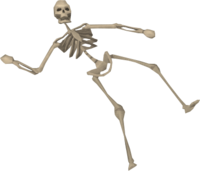