From the RuneScape Wiki, the wiki for all things RuneScape
Jump to navigation Jump to search
The Old School RuneScape Wiki also has an article on: osrsw:Nature Spirit
This article is about the quest. For the NPC, see Filliman Tarlock. For other uses, see Nature Spirit (disambiguation).

Nature Spirit is the second quest in the Myreque quest series. In it, the player must restore the Nature Grotto deep in Mort Myre Swamp to its previous glory.

This time he has a special request for any adventurous sorts to search for the Druid 'Filliman Tarlock' and brave the terrors that infest the swamp of Mort Myre. 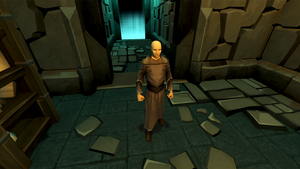 The start of the quest.

To start this quest, speak to Drezel, who is located in the passageway bordering Morytania and the forest east of Varrock (underground, beneath Paterdomus). If you haven't talked to him in the mausoleum since completing Priest in Peril, you will need to talk to him a second time to begin the quest. He asks you to do something dangerous for him, tells you to look for his friend Filliman Tarlock who lives in the south of the swamps of Mort Myre and warns you about the ghasts living there. Confirm that you're sure you want to help and he tells you that you should run away from the ghasts since only Filliman knew how to deal with them. Drezel then gives you six pies (3 meat and 3 apple) to take to Filliman. He also tells you that he saved a few runes which you can use after finding his friend. Put on your ghostspeak amulet now, and make sure you have it on throughout the quest. If you've lost the amulet, you can always speak with Father Urhney in the Lumbridge Swamp to retrieve it. 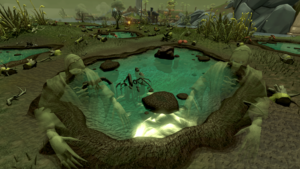 Pass through the Holy barrier south of Drezel to journey out of the temple and into Morytania, then run south towards through gate of a fence to reach Mort Myre. You must use this gate, or else Filliman will not appear later in the quest when you try to enter his grotto. You will find ghasts in this swamp, near-invisible monsters who cannot be attacked and will attempt to rot your food. They often miss, but if you run out of food, they will hit damage on you. You lose a small amount life points at random when in the swamp. This will not happen in the nature grotto.

Go south in the swamp all the way to its south edge, where you will see a large round island with the druid's grotto. You will also see the summoning icon on the minimap. Jump across the broken bridge to the island. If you fail you will swim straight across and lose a small amount of health. 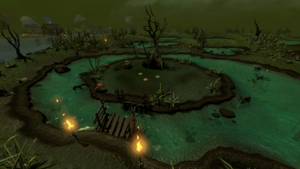 Filliman Tarlock should be standing outside the Grotto tree. If not, try to enter the grotto by right clicking on the tree and he will come out. After you talk to him and tell him that he's a ghost, he won't believe that he's dead, so take the washing bowl off the nearby table (labeled "Bench" in game) to find a mirror underneath. Take the mirror and use it on the spirit of the dead Filliman. After further convincing he finally starts to believe that he is in fact a ghost, although he still feels like he's alive. He has misplaced his journal and asks you to find it for him. Search the grotto tree to find it and then talk to him again to give it to him.

Ask him about his plan and Filliman will tell you that he wishes to become a nature spirit. Ask him if you can help him and he starts interpreting the vague writing in the journal you gave him. He gives you a druidic spell that you can use to cast bloom after you have been blessed in order to find something from nature referenced in the journal. You need to go back north through the gate to Drezel where you started and ask him to bless you. After that ask him to teleport you back to Filliman.

You need to get three things: 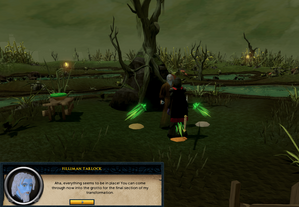 The ritual to transform into a Nature Spirit.

Now you need to go back to Filliman and do the following:

Use each item on the stones. Tell Filliman you solved the puzzle and he will ask you to come inside the grotto. (If he disappears before you finish, just click enter on tree again and when he appears exit the conversation by walking to the orange stone. Then click Filliman again while standing on the orange stone.)

Enter the tree and talk to Filliman, and he will become a nature spirit. He will then ask you to get a silver sickle, so now is a good time to go and make one. It can be made by using a silver bar on a furnace together with a sickle mould, which can be bought for example at Dommik's Crafting Store in Al Kharid and add it to your tool belt. After you've made the sickle return to Filliman (who is now in Nature Spirit form) and give it to him. He will bless it, give you back a silver sickle (b) along with a druid pouch, and tell you to kill three ghasts.

Return to the swamp with the silver sickle (b) and use it to cast Bloom spells (right-click option, each cast costs a random number of prayer points). When cast right next to small bushes, rotting logs, and rotting branches in the swamp, some randomly created produce will grow that can be harvested: pears, fungi, and stems respectively. Use the druid pouch to fill it up (fill is the left click option). A minimum of three harvests are needed to proceed. However, it is a good idea to fill your druid pouches as ghasts will attack you regardless, spending charges, and you may find yourself in a small predicament when you have no more prayer points left to harvest more produce! It is recommended to collect several druidic spells as an alternative, see above. Also see articles on the blessed sickle and the druid pouch for more information on using Bloom and charging the pouch. 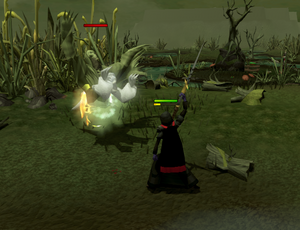 When a ghast attacks, it will use up one of your pouch's blooms, causing the ghast to become fully visible and attackable. While a ghast is attackable you may use any weapon to kill it, you are not required to equip the silver sickle (b). Kill three ghasts by using your druid pouch on the ghast, then talk to the Nature Spirit again. If you can't find him, search the branch inside the grotto and he will appear. He will redecorate the grotto and reward you. 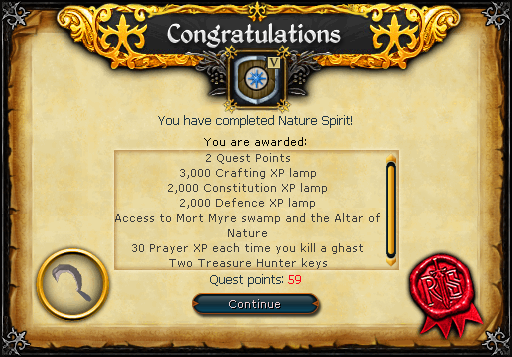 Nature Spirit is directly required for the following quests/miniquests: