From the RuneScape Wiki, the wiki for all things RuneScape
(Redirected from Naragi God Wars)
Jump to: navigation, search

The Naragun God Wars were a series of catastrophic God Wars on the Naragun plane. Not much is known of the events during the wars, with only a few details revealed via Guthixian Memories. The wars started when gods began to invade the Naragi plane. The Naragi, unable to properly defend themselves, became victim of the gods' battles, destroying once great cities such as Askroth. 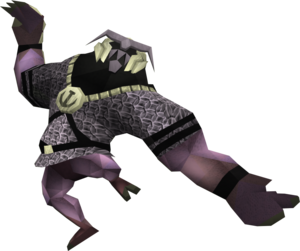 A foot soldier of Tuska, from Guthix's memory, easily capable of tearing apart a Naragi

Tuska, one of most important participants of the war

Saradomin was the first god to arrive. It is believed that he was using his crown, an elder artefact, to find another artefact somewhere on the planet. One of the crown's flaws, however, is that it tells anyone who is in possession of another artefact where its wearer is. Soon Tuska arrived and attacked Saradomin, eventually driving him off.

When the war was nearly over and almost all of the Naragi had been wiped out, Skargaroth showed up to hunt down Tuska. He attacked her when she was about to kill Guthix, who was still a mortal at the time. Tuska, in retaliation, gored Skargaroth and caused him to drop his Elder Artefact, a sword. Guthix, enraged from his daughter's accidental death at the hands of Skargaroth, picked up the sword, blinded Tuska and killed Skargaroth, absorbing his power and becoming a god himself. Unfortunately, by this time, the Naragi plane had already been ravaged by war and Guthix was the last surviving Naragi.

He left his world in grief and agony and began to wander the multiverse until he found a mostly uninhabited planet, Gielinor, to which he introduced peaceful races with the intent of creating a world without gods.