RuneScape Classic NPCs could only talk to one player at a time. Some players took advantage of this and talked to NPCs and did not respond, thereby preventing access to the shops. In RuneScape Classic, players who stood in the same spot for five minutes would automatically be logged out, but this rule didn't apply when players were talking to NPCs. Some players also did this with new quests too. Jagex changed the system so that if a player doesn't respond to an NPC when others are waiting the conversation would automatically end. 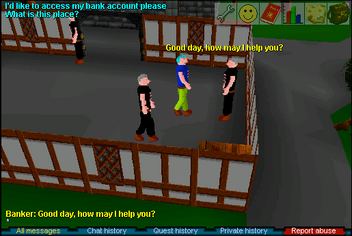