Myths of the White Lands

From the RuneScape Wiki, the wiki for all things RuneScape
Jump to navigation Jump to search
For the achievement, see Myths of the White Lands (achievement).

Myths of the White Lands is a quest where the player investigates into rumours of riches that Explorer Jack has found. Heading into the Land of Snow, you navigate several ice puzzles and elude a yeti to discover some stones which turn out to be nothing more than frozen yeti dung.

Explorer Jack may have taken a break from exploring, but he hasn't given up his old habits quite yet. His constant search for myths that could potentially hold secrets to rare trinkets and other trophies has led him to a passing snow imp, who told him a tale of riches in the distant Land of Snow. Just the task for any wannabe explorer! He now wants you to go and investigate the imp's story to discover if it holds any truth...

Start by talking to Explorer Jack in Lumbridge, in his house just west of the general store. Ask him how to get to the Land of Snow and the phrase 'Ectosum Glissendo' will be seen (this is the same for everyone). Head over to the Wizards' Tower west of Lumbridge (fairy ring code DIS) and talk to Isidor. He can be found by ascending the beam to the 1st floor[UK]2nd floor[US] then going west. Speak to him and he will teleport the player to the Land of Snow. Players are not allowed to teleport with their own snow imp. 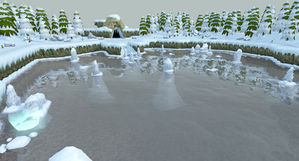 Welcome to the Land of Snow

To get to the caverns, a series of ice-sliding puzzles will need to be completed. The player will slide around and only stop when an obstacle is reached, similar to fighting Plane-freezer Lakhrahnaz within Daemonheim. (Before starting your sliding, check your compass directions to north.) To get through the caverns from the start, directions are as follows: 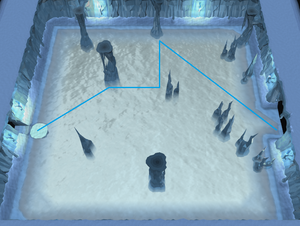 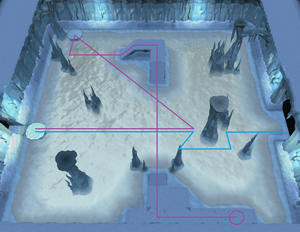 This is the second puzzle room. It contains an optional activity that grants 2,000 Crafting experience, requiring 30 Crafting, which additionally completes part of the Caving into the Gains achievement.

To skip the optional activity and continue through to the next cavern, the steps are as follows:

To complete the optional activity that yields the Crafting experience and completes part of the Caving into the Gains achievement, follow these steps from the entrance: 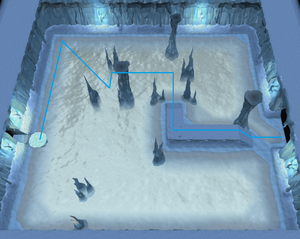 Passing through leads you to the third puzzle room, which can be completed with the following steps: 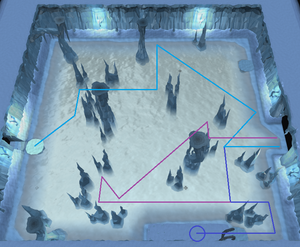 After this, the player will enter a fourth cavern. On member worlds, it is possible to climb the roots onto the risen platform and study the wall for 10,000 Agility experience; players will need Level 55 Agility to do so, which can be boosted.

To skip the optional activity, move:

To complete the optional activity that yields the Agility experience and completes part of the Caving into the Gains achievement, take the dark blue path, followed by the purple path, on the image shown above: 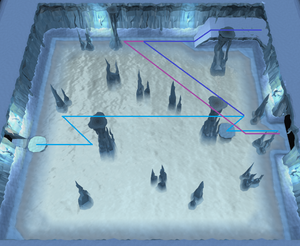 Move east and enter the next cavern. A Yeti inside screams and the sound pushes you back to the starting point in the sixth room. Now, push the two blocks into the niches in the ledge along the north wall. (The blocks cannot be moved before the Yeti's scream loosens them. If the player just keeps re-entering the Yeti's room without putting the blocks in place, from the third consecutive try, players are prompted to push the blocks in room 6.)

One solution to the cavern is this:

Players will end up at the starting point in the sixth room. Exit back to the fifth room. (If you try to enter the seventh room directly, the Yeti there will still scream and force you back.)

In the fifth cavern, go to the crevice in the north-east corner by moving north, west, north, then east. Go through the crevice, and enter the sixth cavern on an ice platform along the northern edge. The two blocks you pushed into place close gaps that you could not cross. Go east across the platform to the crevice in the eastern wall. South of the crevice are roots that can be cleared during or after the quest with level 80 Woodcutting, yielding 20,000 Woodcutting experience. Squeeze through the eastern crevice into the seventh room. Players will be on an ice platform north-west of the yeti. 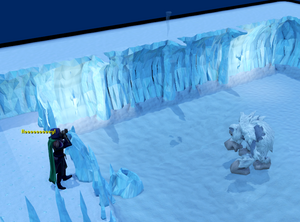 Shouting through the pipe, causing the yeti to faint

Squeeze back through both crevices and go back to the final room (west, south-east, east). Simply walk east into the yeti room. Pick up the stones. Backtrack through all of the caverns, or alternatively, right click and select the "Exit-cave" option on the archway in any of the previous rooms. 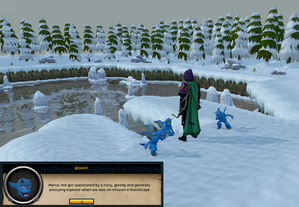 Meeting the three Snow imps outside the cave

When you head outside the cavern, you will encounter three Snow imps: Marvin, Marius and Benny. They will reveal that the stones are actually yeti dung, and they planned to prank Explorer Jack. As you are not nearly as annoying as he was, however, the imps will enchant the "riches", turning them into enchanted stones, and they will now only defrost when given to someone else.

Head back to Explorer Jack. Choose "carry on with the imps' prank" or "tell the truth about what the stones are". Both choices will yield the same results, eventually; they only affect how the conversation will continue.

If you go back to Explorer Jack after relogging, he will give you 5000 coins: your share of the money from selling the yeti dung to a witch. He also says he's been to the cavern and "sliding is great fun. You should go back there sometime." Otherwise... 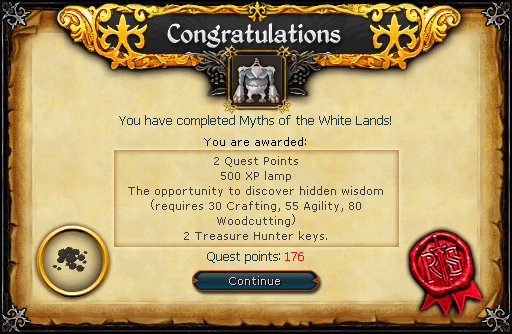 Myths of the White Lands is not currently required for any quests or miniquests.