From the RuneScape Wiki, the wiki for all things RuneScape
Jump to navigation Jump to search
Mysterious person? (edit)? (edit)

The Mysterious persons are six conspirators featured in the Legacy of Seergaze and River of Blood quests. They appear only in cutscenes during the quests, and afterwards cannot be encountered in-game.

Two mysterious persons appear to be leaders of a Morytanian splinter group, and are shown along with four lower group members. One wears a red hood, indicating that he is likely a Zamorakian like many of the group's members. The other wears only tan, including a large hat and facemask that make his identity and allegiance impossible to determine. The outwardly Zamorakian member at one point tells the other to be silent, indicating that their authority may not be equal.

The player is eventually noticed by the group, and both leaders immediately teleport, along with two of their lower members. Two Zamorakians, Zaromark Sliver and Fistandantilus, are left behind to fight the player, but the two also teleport upon defeat. 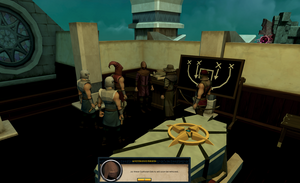 The Splinter Group in Paterdomus, with the leaders centre.

This information has been compiled as part of the update history project. Some updates may not be included - see here for how to help out!
Retrieved from ‘https://runescape.wiki/w/Mysterious_person?oldid=35891233’
Categories:
Hidden categories: