From the RuneScape Wiki, the wiki for all things RuneScape
< My Arm's Big Adventure
Jump to navigation Jump to search

Items recommended: Bring all items required for the next step

Getting the goutweed[edit | edit source]

Getting the tubers[edit | edit source]

Items needed: Items to get 60% favour in Tai Bwo Wannai Cleanup, if you do not already have this. At least 1 free inventory space to receive the gout tubers 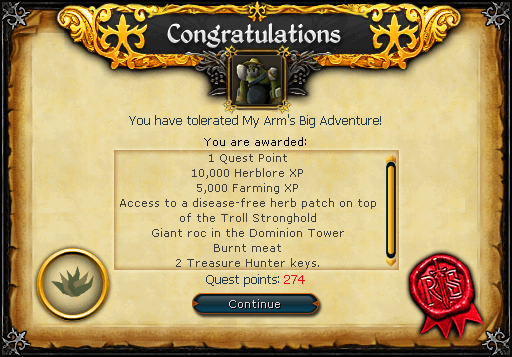 My Arm's Big Adventure is directly required for the following quests/miniquests:

It is therefore an indirect requirement for the following quests and miniquests:
Retrieved from ‘https://runescape.wiki/w/My_Arm%27s_Big_Adventure/Quick_guide?oldid=35962642’
Categories:
Hidden categories: