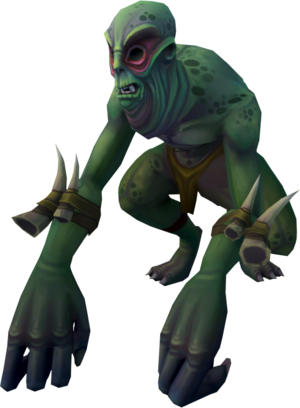 A jungle horror, a modern-day mwanu.

The mwanu (also referred to as horrors) are a race of ape-like creatures originally from the world Jermyn, which is now known as Bobonosia.

The mwanu hailed from Jermyn, created by their creator-god Tezcasathla. According to them, Tezcasathla also created the monkeys, apes and gorillas, but blessed the mwanu with greater intelligence, and demanded sacrifices to be pleased. The mwanu eagerly hunted the lesser beings, both for consumption and ritual sacrifices.

At some point, an unknown god, described as "a great beast of tusk and fury", arrived on Jermyn with a "great horn". The monkeys, apes and gorillas immediately allied with this god, and in a matter of days, the mwanu were on the brink of extinction. Through unknown circumstances, they then arrived on Gielinor's Eastern Sea.

At some point during Gielinor's Second Age, the Cursed Archipelago was mysteriously reduced into a series of uninhabitable reefs and sandy scree, and some time after this the mwanu began devolving into their current unintelligent, highly aggressive state, but they retained most of their culture regarding the black stone.

Remnants of their former civilisation can still be seen today on islands in the Southern Sea, such as Mos Le'Harmless and Harmony Island. One of the ancient, sunken cities was Atyl-Atys. The mwanu are feared by the pirates and monkeys of Mos Le'Harmless, who refer to them as jungle horrors, cave horrors and unspeakable horrors. They still possess some signs of their former culture, such as the black mask worn by the cave horrors.

Some of the mwanu who went underwater evolved into a new subspecies of horror. They allied with Kranon after being promised they would get power to reclaim their homeworld from the monkeys, but most of them were slain when the World Guardian and their allies attacked the ritual site.

They were originally intelligent, and are known to have created villages and cities of black stone, and practised rituals involving cannibalism, the slaughter and consumption of monkeys, and necromancy. They also revered a group of four deities: