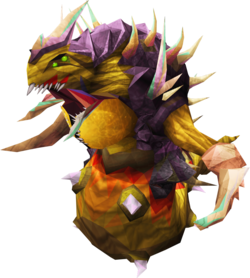 Muspah are creatures created by Mah on Freneskae. According to legends, they were created when Mah combined her most fearsome creatures into one and spawned them while she had nightmares.

They are first encountered in Fate of the Gods, where the player fights off newly spawned Muspah from Mah's nightmares. After the quest, players may return to Freneskae by heading to The Cradle, where three Muspah will continually respawn for the player to fight. They may be assigned as a slayer task by paying 50 Slayer points, which can then be toggled off if players want to stop getting more muspah tasks without blocking them; however, the player must repay this fee if they wish to resume getting more muspah tasks. In order to harm the Muspah after the quest, the player must have a Slayer level of 76. The Shard of Zaros will keep the muspah tolerant; without it, muspah will be aggressive towards the player.

Despite possessing no weaknesses and equal affinity towards all styles of combat, Muspah are extremely weak to the Ancient Magicks, taking twice as much damage as they normally would when hit by combat spells from this spellbook.

Muspah possess a fairly generous drop table, and are generally killed due to their high Invention experience rates with little attention required. Muspah, along with nightmares, can drop muspah spines, which are used to create the Nightmare muspah familiar, which assists in Divination training. Muspah are also the only monsters that can drop the dragon ward and knives.

The crumbling statue uncovered in the desert.

The muspah have been entrenched in Mahjarrat history for thousands of years. They were created by Mah when she had nightmares, and the Muspah traveled in packs, searching for prey they would consume. The Mahjarrat could kill individual Muspah without much difficulty, but their never-ending numbers meant that the Mahjarrat could be easily overwhelmed and killed by them. The Muspah stalked the Mahjarrat during the Ritual of Enervation, and the Mahjarrat eventually adapted by staying close to the lava river, as the Muspah wouldn't dare attack them there.

When Zaros was sent to Freneskae after being impaled by Zamorak with the Staff of Armadyl, Zaros consumed several Muspah, allowing him to regain his consciousness due to being divine creations of Mah.

In The Tale of the Muspah quest, an adventurer and the young Fremennik Erjolf finds a frozen creature in a cave near Rellekka. After consulting a natural historian and investigating and uncovering a crumbling statue in Kharidian Desert, the Mahjarrat Wahisietel will tell them that despite its fearsome appearance, due to the way the muspah are built, they could be destroyed fairly easily, and says that he believes both they and Mah to be mere legend.

The adventurer then manages to free the creature resembling the muspah. The creature is revealed to be Jhallan, a Mahjarrat who accidentally transformed into a muspah when he had a nightmare of one during his sleep.

During Fate of the Gods, players discover that both Mah and the muspah are in fact, very real, and they are battled during the quest. Muspah are also encountered in The Light Within and Children of Mah.

After Mah's death during Children of Mah, Wahisietel theorises that the muspah will eventually dissipate without Mah's energy to sustain them, although this will not occur for a significant amount of time.

There is also a nightmare muspah summoning familiar.