From the RuneScape Wiki, the wiki for all things RuneScape
Jump to navigation Jump to search
Mushroom patch? (edit)? (edit) 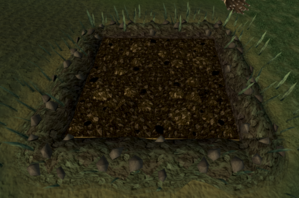 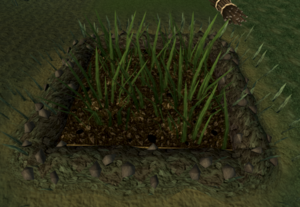 Mushrooms are a type of Farming patch requiring a single spore to plant, starting at level 53. There are two mushrooms patches, one in Canifis and one in Tirannwn. Completion of the medium set of Tirannwn achievements is required to use the Tirannwn patch. After completing the medium set of Morytania achievements the Canifis mushroom patch will no longer get diseased. After completion of the elite set of Morytania achievements, the harvest from mushroom patches is doubled.

Players with level 81 Archaeology can activate the Pharm Ecology relic power at the mysterious monolith to prevent all mushroom patches from becoming diseased.

This information has been compiled as part of the update history project. Some updates may not be included - see here for how to help out!
Retrieved from ‘https://runescape.wiki/w/Mushroom_patch?oldid=35682655’
Categories:
Hidden categories: