The Mummy Champion is one of the 16 champions fought as part of the Champion's Challenge Distraction and Diversion. Like the other champions, she may be fought beneath the Champions' Guild but only after a player finds a Mummy champion scroll, which is a very rare drop from mummies. After being defeated the first time, she may be fought again weekly for additional Slayer and Constitution experience.

Like the other champions, there is a special restriction during the fight with her. In her case, off-hand weapons, shields, and two-handed weapons are prohibited. She fights using a powerful magic attack from a distance and melee up close. Additionally, like other mummies, she can be set on fire using magic. As such, attacking her from a distance with fire spells while using the protect from magic prayer or deflect magic curse may be the most effective way to defeat her. 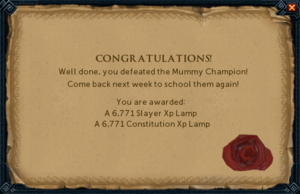 After defeating the Mummy Champion 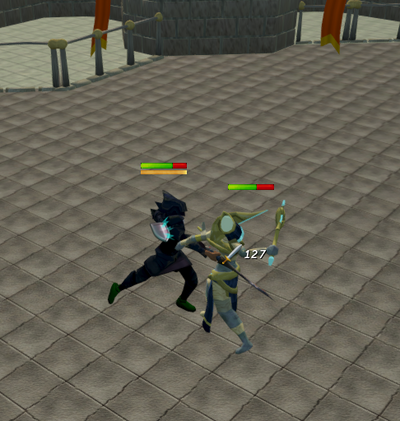 A player fighting the Mummy champion.

The update history project is a work-in-progress – not all updates to this topic may be covered below. See here for how to help out!
Retrieved from ‘https://runescape.wiki/w/Mummy_Champion?oldid=35378458’
Categories:
Hidden categories: