From the RuneScape Wiki, the wiki for all things RuneScape
Jump to: navigation, search
The Old School RuneScape Wiki also has an article on: osrsw:Multicombat area

Multicombat areas are identified upon entering by two crossed swords (

) which appear in the bottom right hand corner of the interface or under the mini world map. Anywhere else is a Single-way combat area, also known as a single combat area.

Multicombat areas are especially dangerous in the Wilderness, as a player can be attacked by more than one monster or player at a time. It is very useful, though, to be in a multicombat area while monster slaying with friends, as lone players can be killed easily.

Notice, when you are using Magic/Ranged on an enemy behind a barrier, such as ranging goblins behind a fence, even though it's not a multicombat area, as long as you aren't under attack, you can attack more than one enemy.

Multicombat is also required for a Summoning familiar to assist in combat, since a player and their familiar both fight one enemy. However, dreadnips could fight the same opponent as the player without being in a multicombat area. 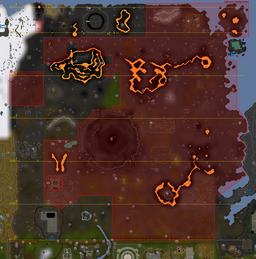 The borders of the single- and multi-way combat areas of the wilderness for PvP.

Technically, the Dwarf multicannon is not a multi-hitting weapon; it simply shoots at many opponents very rapidly given that the player is not under attack or is in a multi-combat area.