From the RuneScape Wiki, the wiki for all things RuneScape
Jump to: navigation, search
"Maw" redirects here. For the island in the Arc, see Whale's Maw.
Motherlode Maw? (edit) 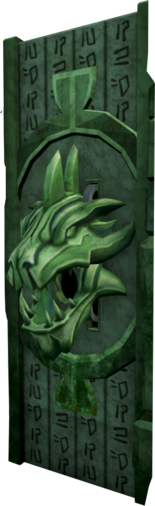 The Motherlode Maw is a dragonkin visage found in the Edimmu resource dungeon in the inner circle of the Meilyr Clan district of Prifddinas. Getting to the dungeon can be easily done via the Dungeoneering cape's perk, and players need level 115 Dungeoneering to enter (non-boostable).

Once inside, should a player have at least level 95 in all other skills, they may put their arm into the Maw and retrieve a random treasure once per day. Otherwise, they will receive a message stating the required levels to access the Maw. Rewards include a range of items, some of which can be useful in helping players complete requirements for the regular and trimmed completionist cape, as well as for the master quest cape.

Rewards received are weighted towards requirements which have not been completed by the player, but it is still possible to get items towards requirements that players have already met. Additionally, players may once per day exchange with Wythien 10 crystal motherlode shards for potential rewards similar to those given by the Maw. Players who have allocated 100 quest points to the Hub track of May's Quest Caravan also have a chance to roll a reward from the Motherlode Maw table upon opening a chest obtained from Meg.

A player reaches into the Motherlode Maw.

It is possible to receive a potion even if the player has not unlocked the ability to make that potion.

Receiving an impling jar from the Motherlode Maw does count as catching that type of impling for Daffyd's impling checklist. The pirate impling can be obtained even without completion of Rocking Out.