From the RuneScape Wiki, the wiki for all things RuneScape
Jump to: navigation, search
Not to be confused with Mossy rock (monster).
Mossy rock? (edit)

The mossy rock is an item found in the Lost Grove. It can be found at one of a number of locations throughout the grove, on the floor (marked with a yellow dot on the minimap). The rock shakes and makes a similar sound only heard when both Sound Effects and Ambient Sounds are on together. The rock can be heard from up to 14 squares away. Once found, it can be picked up and placed on the headless moss golem to unlock the Clover pet. The rock can still spawn after obtaining one or unlocking the pet, however attempting to pick it up will give the following message: "You have already retrieved this item. You cannot get another." 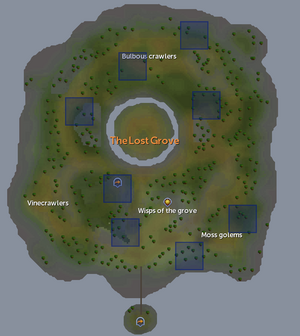 An overview of all possible spawn locations.

The update history project is a work-in-progress – not all updates to this topic may be covered below. See here for how to help out!
Retrieved from ‘https://runescape.wiki/w/Mossy_rock?oldid=31536495’
Categories:
Hidden categories: