From the RuneScape Wiki, the wiki for all things RuneScape
Jump to navigation Jump to search
The Old School RuneScape Wiki also has an article on: osrsw:Moss Giant Island

Moss Giant Island is a small island just off the north-west corner of Karamja. Level 10 Agility is required to swing on the tree-hung rope to access this island. There are 5 moss giants on the island. There are a few safespots as well, allowing for ranged and magic combat. Unlike other moss giant spawns, this place is relatively vacant. 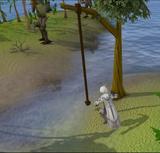 The fastest (and free) way to get to the island is to home teleport to the Karamja lodestone and run north-west.

Two slices of cake respawn on the island. It respawns approximately every 54 seconds and may prove to be a decent source of food for low levelled players.

Many players like to use a dwarf multicannon on Slayer tasks. A good place to place the cannon is in the clearing on the south of the island. If the player then stands to the west of it, the cannon will rotate and shoot two of the moss giants, while another will spawn on top of the cannon for the player to attack themselves.

This island is also a possible place to go to for a Treasure Trails clue.

This information has been compiled as part of the update history project. Some updates may not be included - see here for how to help out!
Retrieved from ‘https://runescape.wiki/w/Moss_Giant_Island?oldid=35702911’
Categories:
Hidden categories: